I think i’ve seen someone on the forum talking about something like this, but I searched for it and could’t find. 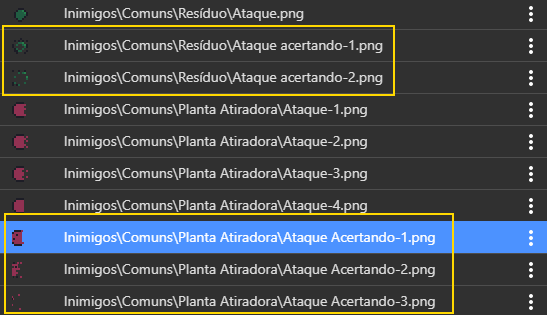 This supposed to load the images of the Planta Atiradora, but it’s loading the resources of Resíduo!

The problem is not on events. I can delete everything!, create just a new object with another name to the animation and it still happen. I tried too without sucess delete from resources the imagens of Resíduo (Planta Atiradora starts to load the correctly images) and put again in the game on the animations of a new object for Residuo, but Planta Atiradora starts to load wrong images again.

I could’t reproduce it on a example. And since all my images have the same names and only this one have this issue, I probably did something specific with “Planta Atiradora” and “Residuo”, but I have no idea what it was.

The only way I finded to fix this is changing the name of images. To prevent this happen again, I’ll do it to all my images.

Would you mind making a step by step explanation to replicate the issue on a brand new project? That would help us investigate the issue. Thanks!

This happens to me as well. I’ll be working in one project, and images with the same file name (such as coin.png or clouds.png) will show as the versions from the previous project. The only solution I have found is to completely close GDevelop and reopen it (as opposed to closing one project and opening another). I assume it has to do with some sort of cache not getting cleared…but I really have no idea.

I’ll try, but like I said I don’t know what make it happen. I was working in another part of the game when I tried to test again the attack of my enemy “Planta Atiradora” and noticied it. I changed my on project deleting everything don’t make any difference for it and put on google drive. Maybe you can reproduce it with this?

edit: have a newbie extension on this, kkk. just ignore.

My problem is different. On animations show all my images right. But when the game starts the animation displays the wrong images of another object. probably because the images have the same name. The strange thing is: they have diferent directories.

Is this when you’re testing it within GDevelop, or when playing an actual compiled game?

Just testing. If I got time today i’ll make a video to make it more clearer

Sounds like we’re having the same issue. It’s been happening to me for as long as I’ve been using GDevelop (three years or so). It doesn’t happen all the time, but enough that I’ve just gotten in the habit of closing GDevelop completely and reopening when switching between project files.

Thinking better… maybe it has some connection to my extension. Both objects “Residuo” and “Planta Atiradora” had the behavior and only their shots buged. On my extension was possible to change animation by a paramater. I’m trying to reproduce in an example and no sucess, but what is curiously is if I copy the directory of “Resíduo” and “Planta Atiradora” even in a new project they show the same problem!

Now i gonna focus on the extension

I remember I pointed it in another post. The problem is that Gdevelop doesn’t uses the folder structure to organize the images, but the name of the image instead. If two or more objects use the same file names for their sprites, the Gdevelop will use just one set.

I’d actually think about this the opposite way. Most compiled games from any engine doesn’t take into account project folder structure at all. Its just that most other engines have to convert assets for use with HTML5. With GD5, it can export to HTML5 natively by just generating the js and HTML5, so it just exports it to what it considers the natural state (since the projects don’t truly expect a managed folder structure anyway, although it can support it) Maintaining folder structure is on th…

Maybe it is time to add a note in the help files and/or in the example files remembering to use exclusive file names for different objects’ animations, even if you are using folders to keep said animations apart.

I liked the idea to include a note, because discover it after done a good part of the game is a big work make the changes in all the names of images and reinserting them into the animations. And need to be very careful, because if delete all images of an animation before to put the new images it’ll lose the colision mask and the edited points.

And now I know why I could’t find your topic. It’s because I’m was looking just in the “Bug reports”.