So I have setup my interstitial ads when the player hits the obstacle, it also triggers a sfx coincidentally. So the ad plays and unless you close it manually it doesn`t return to the game and whenever you return back to the game it creates an echo in the sfx! This sure looks like a bug…anyone has faced this before? Also way to get around it?? Thank you!

Usually, echo means a “Trigger once” is missing.

Checked it, it does have trigger once in the condition, will try to add variable in the action and do it again… 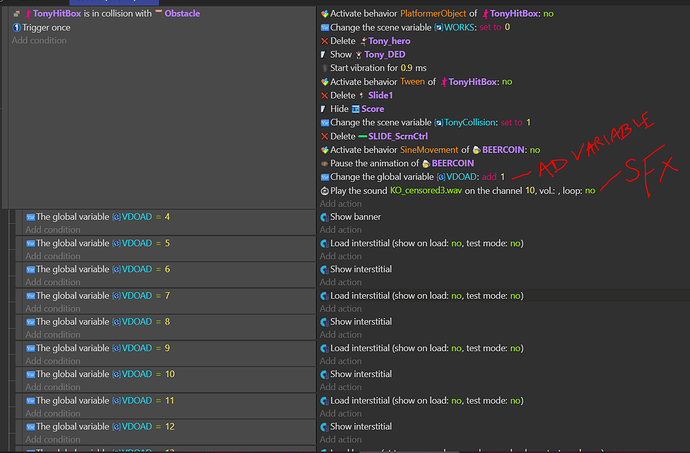 it`s set from 4 cuz i want the ads to appear at the 4th try, the banner works ok. Only the interstitial delays the audio

Yes, that`s the problem…. would be great if someone can replicate the situation and try it on their end

Well, sounds like a bug indeed.
I’ll move the topic to Bug reports.
I don’t use ads, so I can’t help you with that. Let’s see if someone else can.
If you’re able to reproduce the issue in a dummy project, we can send that to the devs.

sure, will do that…

If you find a solution, please let me know.
Please​:cry: