here is an example: 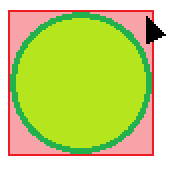 P.S. Ive already tried to change the hitbox of the sprite

If you gave it a circular collision mask then you might still be checking for the wrong collision. There is a separate collision condition that does not check for pixel perfect collision and only looks at col-masks instead.