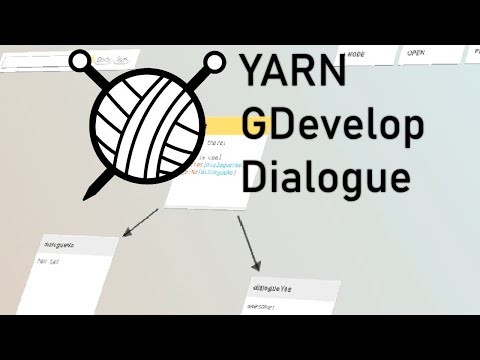 But, if i do it 1:1 my player can pass the obstacle behind the object whit what he is in dialogue (by pressing x)!

So my external event of the player movement isn’t in between the code of the dialogue but on the beginning.
This solves the first problem!
I know, this doesn’t make sense:roll_eyes:, because it’s a door, but let us say it’s not a door it’s a person.

Now my problems are:

for player movement, set it that the player’s mas speed = 0 when a dialogue is active. that prevents from moving. if you have it set the different animation with keys you’ll need to change it to set them depending on the force’s position.

For the options. It sounds like you are running it with the same text object, they need to be separately text object.

Do you mean max. speed?
Tested it, but

But how can i set the players max speed to standard after the dialogue is closed?
I’ve looked what the Max.speed of the TopDownMovement behavior was and set this value manually.
This is not optimal, because if in the behavior the speed changes…

Hmm, how can i do it with 2 text objects?

Like i “learned” within the YARNeditor there is the question and then multiple options in one .json file as answers to choose.

I suggest you make this problem your top priority

Most if not all the features of GDevelop are demonstrated in the examples, they’re very useful.

I have looked at the big yarn example but still can’t get it to work.

So my problems still exist.

I’ve done what the video above shows - step by step.
My events are looking the same, then add some things for testing if player don’t move if dialogue is running.
But why does it not work then? 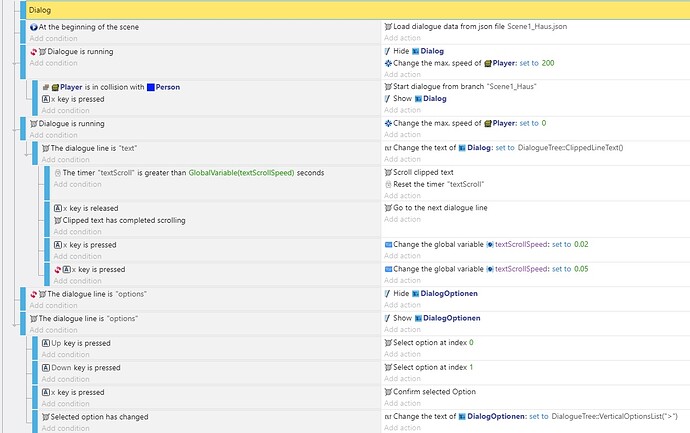 You can check this maybe helps 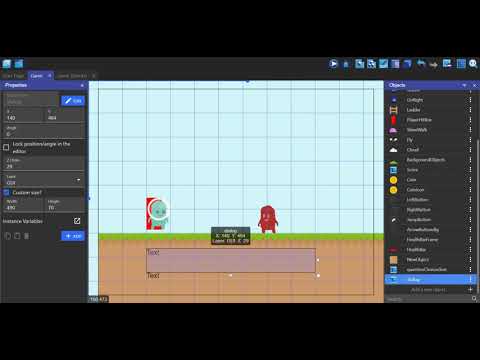 Sorry, but none of this (good) videos helped me, because none of shows how to fix it.

But one of my problems

After pressing and releasing x to display the first dialog question, I have to press x twice more (and release each time) to get the answer options displayed

could be fixed by myself.

I had spaces and a paragraph (empty line) in yarneditor.
How was I supposed to know that?!

But the other problems still exists.

You have to manually put back the maxspeed when you end a dialogue. An other method is to make an event with only:

Or in the event when you are going to finish the dialogue put in the actions: maxspeed= 0

The sub event in the ‘not running dialogue event’ is supposed to be an normal event not sub event.