I have 4 pawns they are instances of an object called Player. They start at a place and when a six is thrown one goes to the starting point. When another six is thrown one more etc… There they all overlap each other. When i click them they all move at once to their pathfinding destination. What i need is to just move one and let the other ones stand there.

So the point is if one or more are overlapping each other in one place one must always be visible and when that one moves the other one needs to become visible. I got this to work until there are two times two that overlap.

Any help would be appreciated

MMM … maybe a photo or where to download your project help users get an idea of ​​how to help you.
I little understood and I’m noob, I’m sorry.

for what you say.
Your game is like monopoly type with dice and that?

and if you place all instances at the start, and one of them needs to move, where they will know who has to move? isn’t easier spawn only one, and when it is reach the desired destination, spawn the next one?

The instances exist from the start. Where they move is based on the amount of thrown dice added to where they are already. So the problem i have is not only at start but going on in game itself too. Because sometimes there are 4 pawn (called player) that fall on two groups of two players wich means both groups have a distance smaller than 10pixels

So the easier question is how to if two instances are at same spot make one visible. Wich you can see i did in my code on the first expression. I only have a problem when either 3 are overlapping or the two groups like i said.

I don’t understand much but maybe object variables apply to all instances at once.

I don’t understand the instance and object variables very much, but maybe that’s the conflict.

Wouldn’t it be easier to create player 1-4 separately?

sorry, I dont understand exactly. all 4 object is belong to one player, or they are one-one objects for 4 different player?

From what he says I think there is only one object called player repeated 4 times (instances) on the screen from the beginning.

than doesn’t need to hide any. when they overlapping each, only the uppermost is visible.

exactly. One object but repeated 4 times so 4 instances of one object

4 belong to one player. Each person has 4 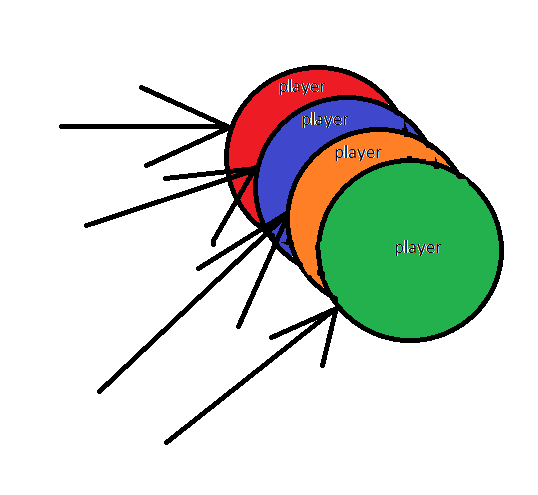 Do you need to be a player repeated in different instances?
Wouldn’t it be easier to create player1,2,3y4?

The image is correct as you showed.

It wouldnt be easier because then need to change all rest of the code i already spent long time on and its not easely changed. This is basicly the only thing that needs to be fixed

mmmmm
I see. That is a great detail to consider.

You have considered that the movement of player the condition:
-player animation +
-click mouse

action = move player
An example of how to move one at a time:
http://www.mediafire.com/file/3cxgx6zhxce1grl/My_project27.rar/file

Your problem would be the arrival order?

edit2:
but the player that must be visible at the start is chosen randomly or do you choose it?

A photo of the overlap you say would be indicative to better understand.

I am hard to understand.

no that i have all done

if these actions happens oly once in each game, is enough?