Lost running back & forth

Hello All!
I had made the enemy, “Kristi”, a global object, not understanding that I wouldn’t be able to modify her animations at all between levels, because any alteration would be immediately added to her on all levels, and there is no way to revert the opponent to a scene object. I should have been more wary of the warning, but the convenience overruled my logic! So I ended up with no option but to import her again, replace the global version everywhere with the scene object, then delete the global version. This almost worked, except that, WHEN I HIT PLAY, SHE JUST RUNS OFF THE RIGHT SIDE OF THE SCENE, and is gone. I went through a lot of tutorials to get to that point, and can’t remember everything I did. WHAT DO I NEED TO FIX, SO THAT KRISTI RUNS BACK AND FORTH BETWEEN THE TWO PILLARS, AS I HAD HER DOING BEFORE I HAD TO REIMPORT HER? 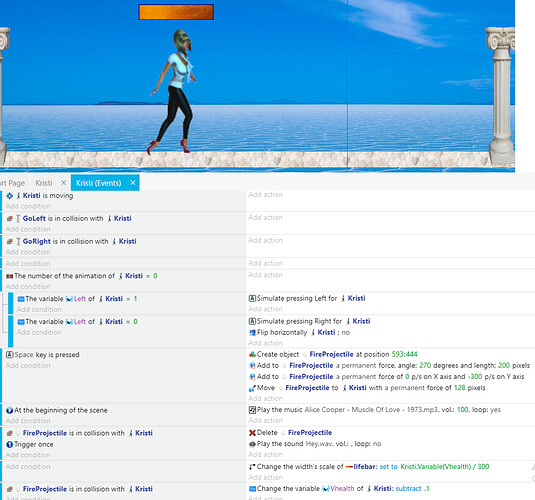 You are not changing the object’s animation and you are doing nothing when the object collides with the direction changers. I recommend adding a force to the object and not use the default controls. Don’t know the advantage of it, but it worked for me.

As Midhil wrote - you’ve got a collision condition between Kristi and GoLeft/GoRight, but no actions .

I personally wouldn’t use a force, and I’ve used Simulate keypress without a hitch. And do remove the default controls so that Kristi is not able to be controlled by the player/keyboard.