As you can see the jump is only possible with higher framerates. I don’t want people to be at a disadvantage in my game if their PC is worse, and since it’s a platformer, it would make some levels outright impossible. I tried multiplying by timedelta but that just seemed to invert the problem

It’s really unclear from your description and video what the problem is. So I’ll have a stab at it and say that the pink block isn’t jumping as far to the right at 72 fps as when jumping at 144 fps. Is this correct?

If that’s the case, can you provide a screenshot of the movement and jump events? jump length should be the same regardless of fps.

Sorry, I will clarify. Yes the problem is that the player jumps further when the fps is higher. Here is a screen shot of the wall jump code 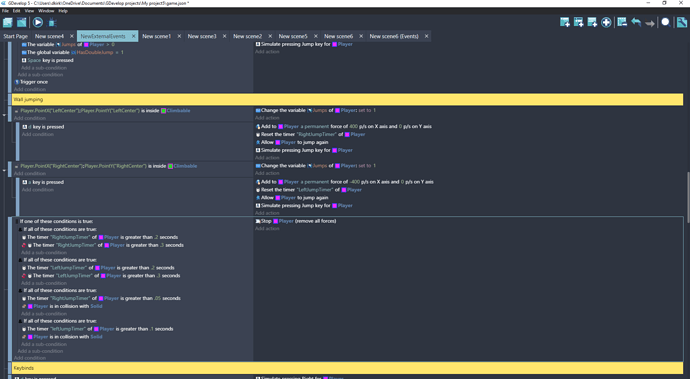 Nothing in there points to events being the cause.

I’d suggest you create a minimal project that replicates this, so just the player, walls and 2 platforms along with the jump events, and if the same thing happens, submit it as a bug.

I was able to recreate the issue, but it happens on a much smaller scale (Only around 3-5 pixels), and lower frame rates lead to further jumps (The opposite of the problem in my game). Could the problem be that when there is a higher framerate the permanent force action is getting activated more often since I am using point collision with the point being outside of the player hitbox, thus causing the player to accelerate faster?

EDIT: Yes, that was indeed the problem. I fixed it by adding a once to the action that adds a permanent force.