Hey, Currently Im just trying out p2p, and I run into a issue, somehow player 2 wont move left on the other client, I cant really explain what the issue even is, or why it isnt doing anything. 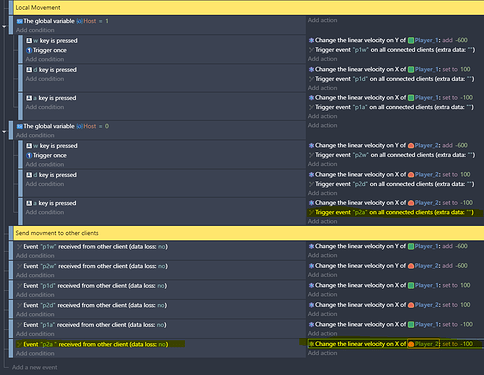 I marked everything yellow, that is involeved in this movement. All the other movement works, like jumping of going right, player one works perfectly, he can even go left.

That’s not a very good way of doing p2p, it’s guaranteed to get desynchronised especially after a few minuted of playing. I am sorry that this is not answering your question but your aproach simply won’t work on the longer term. You should either

Im syncing up games every 5 secounds, so its not that big of a deal. Im also right now trying something out with positions, but without luck, but any idea why I just cant move left? Strange

Send the position as extra data and set the object position to it. This is simpler to do but makes cheating trivial, anyone can send fake position or stuff like that.

Also I dont really care about cheating, I mean Im not trying to make the game cheat 2 win, but you wont really get any benifit out of it, because it is a 2 player multiplayer game were you have to work together.