Part of my game has cities generating resources every few seconds: wheat and gold.

Here’s how it works (screenshots at the end for reference):

The issue: The ‘stored’ variables are reset to 0 correctly (I checked the Debugger), but the ‘stored’ text objects are flashing and going back to the pre-collect number, and keep going up.

The weird thing is, the first instance of the location object is resetting to 0 with no issues, but any other object instances aren’t resetting.

I’ve attached screenshots of my events and the game UI below, any help would be appreciated!

(Please ignore the awful UI, they’re all placeholder assets so I can focus on development) 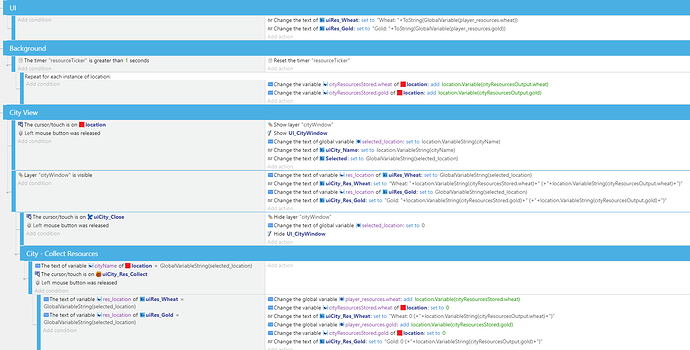 This is the first instance of the location object’s City Window, after clicking the shopping cart icon (the Collect function). It reset to 0 without any issues. 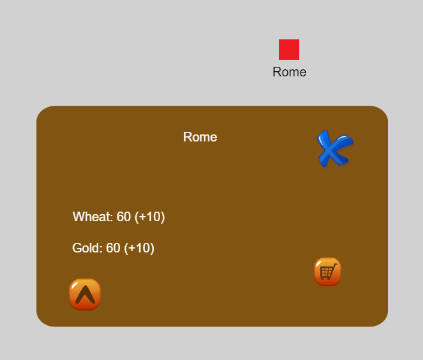 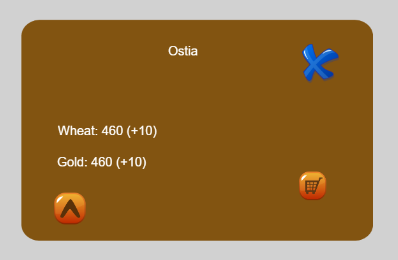 Edit: realised I named the location objects as city by accident

Perhaps I’ve missed something in your given code, but if the mistake only happens on another instance of the City variable (does it happen if you have more than two?), that means you have to look at the code creating a city (“location”) , or any instanced variables you have for Rome.

The same thing issue (not resetting to 0) happens to all other location instances, so more than two as well.
There’s no code creating the instances, they’re pre-placed in the scene with their own unique variables (name, resource output etc)

Edit: Just realised the possible confusion - I called the objects city instead of location in my post. I’ve now updated the references

**but the ‘stored’ text objects are flashing and going back to the pre-collect number, and keep going up.

This tells me you have a conflict of text changing actions. You need to remove some of them or add conditions to avoid conflicts.