[Solved] How do I create sprites with indiviual object variables?

As the title says, I want to spawn objects with a instance variable (health) and then subtract from it when my bullet collides with them. No matter what I do, the object always delete off spawn (when variable equals 0 they get deleted) or when i make them not delete when object variable equals 0 they dont take any damage. Not sure if im supposed to set the object variable to 50 when i spawn em or at the start of the scene 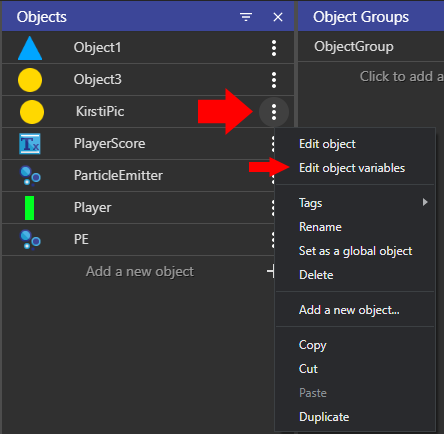 Your variable name will be different and the value set to a number, but you get the idea.

So this is what I have right now, I did what you said and added the object variable but for some reason the enemy’s are getting destroyed instantly. The “bullets” are the vegetables and they have a physics behaviour (if that matters or not)

Sorry if this a dumb question, just putting my game to a halt atm. Also i have the collision with the vegatables and enemy twice as I was messing around to see if MAYBE it worked or something

It worked! Thank you, your a lifesaver!