Hello All!
So I am making sort of a hybrid platformer, in that the enemy is running back and forth from left to right, the difference being that my “gun” is in first person position, not off to the side as in typical platformer. Picture a “shooting gallery” setup. To make my “bullets” go in the direction of the enemy, I turned them facing up in Piksel, but during “play” in GDevelop, the bullets left the gun traveling 90 degrees to the right. So I then added a force at 270 degrees to them, which made them leave the gun going forward, The problem is, they shoot over the head of the enemy, and nothing I do (lowering the y on the projectile, adding force, etc.) seems to fix this. Any ideas?

Can you share a screenshot. So, that people can better understand it

Hi there,
Not too clear what you mean, but it sounds like you want to fake depth.
In that case, the bullets need to move to the horizon line, never beyond. The traveled distance on Y axis needs to get smaller as the bullets approach the limit, and if possible, they should get smaller to give impression of distance.

OK, thanks for replying. As it turns out, the bullets were colliding with the opponent. They just appeared to be going high. A little modification of the projectile behaviors fixed that, but then I ran into a much bigger problem! I had made the enemy, “Kristi”, a global object, not understanding that I wouldn’t be able to modify her animations at all between levels, because any alteration would be immediately added to her on all levels, and there is no way to revert the opponent to a scene variable. I should have been more wary of the warning, but the convenience overruled my logic! So I had no option but to import her again, replace the global version everywhere with the scene object, then delete the global version. This almost worked, except that, WHEN I HIT PLAY, SHE JUST RUNS OFF THE RIGHT SIDE OF THE SCENE, and is gone. I went through a lot of tutorials to get to that point, and can’t remember everything I did. WHAT DO I NEED TO FIX, SO THAT KRISTI RUNS BACK AND FORTH BETWEEN THE TWO PILLARS, AS I HAD HER DOING BEFORE I HAD TO REIMPORT HER? 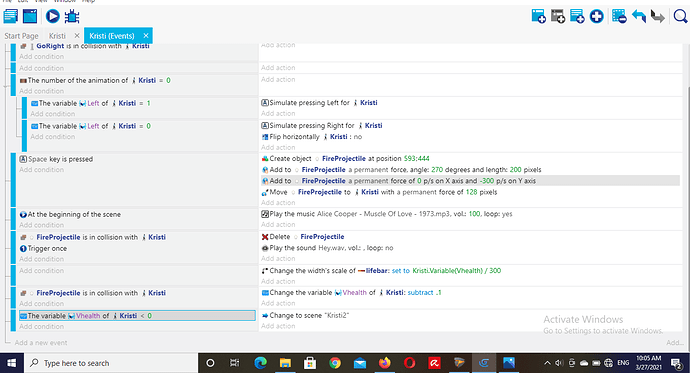 Obviously, you need an action that changes that variable if you want her to change direction:

And please stop the UPPERCASE.

Have you tried following a tutorial? This is a great one about enemies, How To Create Advanced Enemy AI in GDevelop Free Game Engine - Tutorial - YouTube