Dialogue extension : issue with node containing only one option (answer)

I’m having some fun discovering the dialogue extension with yarn, and i’m planning to use it to replace the actual homemade dialog engine i’m using in my game Swamp for easier translation management and productivity, since it seems the extension become more and more stable. The demo uses actually 6 differents languages, the full game might have even more

To discover the extension, I’m working on a test project that i plane to release as an example, but i’m facing a strange game breaking behavior, so i’m reporting it here to discuss, before reporting it on github.

The issue occures when i use nodes containing only one option (=one answer): 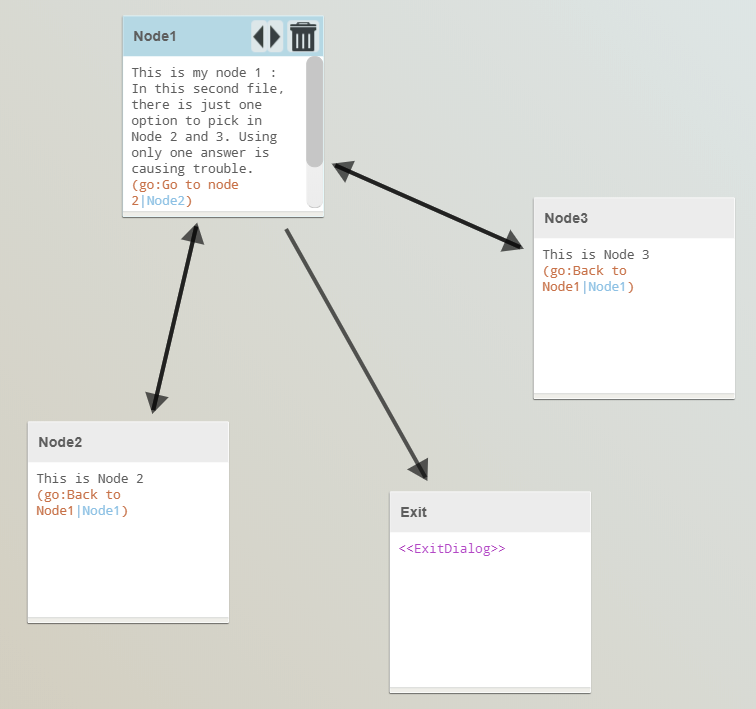 When i reach nodes containing only one answer, the text line plays normally, but when the “clipped text has completed scrolling”, the text of the current node imediately disappears, and the first node of the tree is playing again instead.
it occures only (and everytime) when i use a node with a single option/answer.

Am i alone ? Fact is i need to use node with single answer, and i dont think it’s a normal behavior… But maybe i’m missing something else ?

One choice is not really a choice, right?

It’s triggering it automatically, because of:

Add a click/key released condition to wait for user trigger.

This doesn’t avoid the issue at all, Node 2 and Node 3 are displaying the text, then i right click, and the options buttons aren’t appearing, the text from the node1 just plays again instead.
It’s just like before, with an unwanted input

There are no option buttons because there are no options, only one choice is not an option, it’s a “after that, go to:”.
I guess you can use a command if you want to display a button?
You’ll see commands have their own issues

I played with command, but i dont wan’t a workaround, and i want use yarn editor feature like it’s concepted.

One choice is one choice, i can’t imagine a dialog system where you can’t propose a single choice as answer, we can see it in every game.
In my opinion, the options listing should work the same with 1 or 100 answers. Sometimes you just a want dialog to finish with a sentence like “Hasta la vista, baby!”.

Basically, it’s a bug ? Unless someone can explain me why my “single option dialog” isn’t working ?

Not sure if it’s a bug, a missing feature, or a limitation, the yarnspinner docs don’t say explicitly that two options are required… 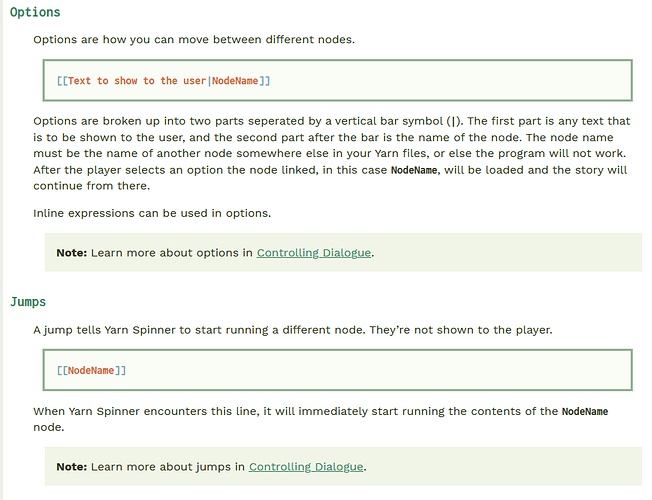 Just to chime in here, but doesn’t “Right mouse button has been released” always return as “true” after the first time it occurs?

I don’t think it checks for another click then release, although I could be wrong.

Could you try changing “Right mouse button has been released” to something like “T key is pressed” as a test?

@Silver-Streak, exactly the same with a key pressed (and/or released)