I have a game in one scene that could probably run on a nokia phone. But half the time the frame rates drop below 30 fps or it jumps around and feels stuttery. Ive found ways for it to run well in preview, like if I disable/enable any event the game then it will run normal, or if I run it in debug mode 100% of the time it will run well. When I have friends play test it, some of them have the game never drop below 59 fps and some it runs at like 20-30.

When you run it in preview, can you press CTRL+Shift+i, click on the console tab of the window that comes up. This may show a number of red errors (screen shot and post them in this thread if you need help figuring them out) 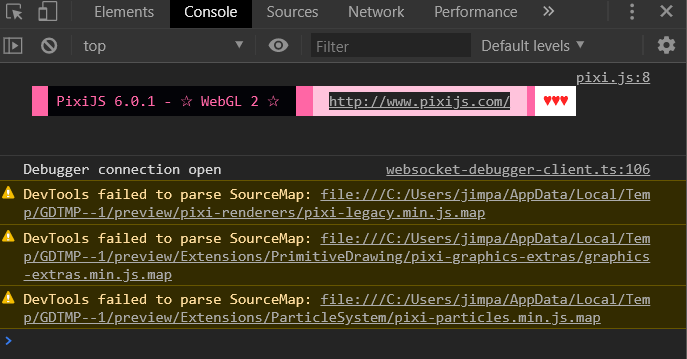 These warnings are not a problem.
Can you make a Web build, confirm that the problem occurs, and share the link?

I’ve never finished writing this page, but I hope it can help you optimize your events and your project for mobile.
http://wiki.compilgames.net/doku.php/gdevelop5/events/draft-optimization

Thank you this is very useful, but I don’t think the game is bloated much, and I’ve made sure it runs well. Im confused on why sometimes the game runs well and sometimes it doesn’t in the same scene where nothing has changed. Its not if a heavy event happens then it drops frames, its the game will either run well or another launch run bad.

The times I’ve come across this kind of variation in performance it ended up being another application that was hogging the CPU on the machine (apps like Discord, Steam, Windows Updates, MineCraft and the such have quite an impact). Open up the task manager, and order processes by CPU usage. When you run your game and it starts to lag, check what the top couple of processes are in the task manager.

Also, your machine specs may play a part, though I don’t understand how it would make it run fine in debugger mode, unless it’s just lucky timing.

Optimize your conditions and make sure there aren’t too many collision checks going on. This is the best way to improve performance, I’ve found.