I finally completed it: Veil of Shooting Stars

Have a go at it here: Veil of Shooting Stars by audze
Use it as a Storyteller’s Aid in generating campaigns or use it as a Tarot Divination device.

edit: oh crap, i think i posted this on the wrong sub-forum, would appreciate it if the admins can move this to “Game Showcase” instead. Thanks!

Sweet, graphic are nice, and i like the effects, strom, rain.
You have formated the time well done

I don’t know if you music have noise, but in my headset i heard noise on each bass note.

Thank you Bouh for the heads up, I will look into the noise issue. It could be because i over-compressed the sound files, or the worst case scenario because of clipping. Perhaps i should go for -6 db instead of -3 db.

I still have some more ideas to implement in the system, i hope it can be useful to anyone who needs an idea (or push!) for a game story or rpg campaign. Sure beats having to depend on the game master for everything lol.

Wow…I have no idea how to use this, lol, but I’m seriously impressed by it!

Thank you so much for the rating and comment.

How you use it is up to you and how you want to interpret it. You’d basically generate a set of Glyphs by clicking on the Planetary Avatars. How the glyphs fall together, how they face each other, whether if they are side by side each other determines what and how the story will progress.

The Glyph Cards themselves will show what you can work with in terms of definition and situation or person. They are all neutral, positive or negative aspects will be determined by the color orbs you see next to the generated line. Green for Good, Yellow for Neutral and Red for Bad.

For example, if you drew the Cain and Abel card under the influence of Venus, that falls in the House of the Sun and is next to the Socrates Card: It can mean a “verbal attack” from a female or someone who works in the “creative” faculty and is a government official. If the Glyph is in Opposition to say, The Matriarch Card, it means the person being targeted is either a nurturing parent or a woman. So on and so forth.

You can also use the timeline cycle to figure out when and how long this event will take place. Let’s say the aforementioned person falls in the House of the Sun and the Matriarch falls under between the Moon/Saturn Houses , this event can happen either between 1 day/week/month/year or it could be 7 days/weeks/months/years and etc.

If you are in need of an idea to do a game, this can help “generate” a story or progress by this process. All of which is open and flexible and entirely up to you to interpret.

There’s still some modules i will implement in the system in the future, namely: The Phenomenon of Pairs (which invokes extra/new cards that come in a pair - like Ishtar and Tammuz, Osiris and Isis and etc.) and The Path of of The Thunderbolt (which invokes the 7 Planetary Archons and their influence thereof).

Check these videos for a better context of what kind of story this can generate: 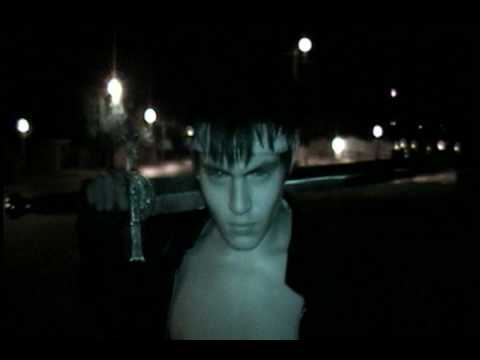 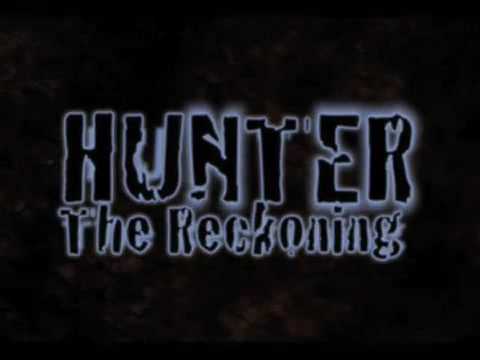 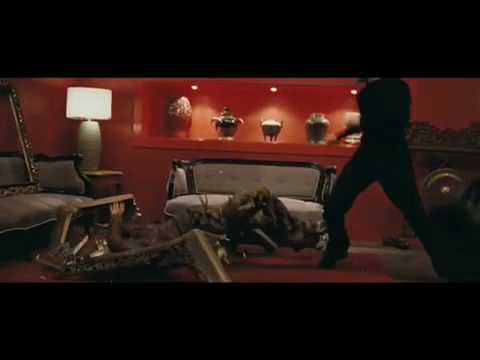 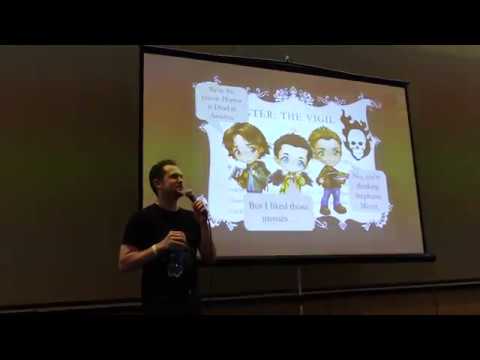 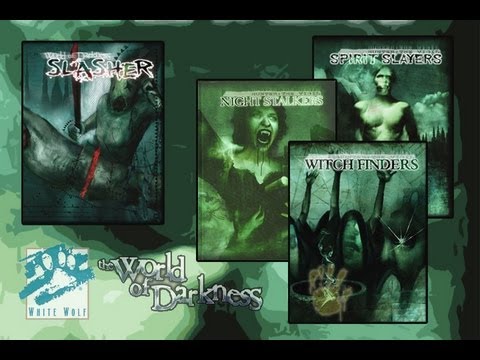 I am going use my own gig for the next session of Hunter The Vigil Slasher with my buddies this weekend lol.

New Module: The Path of The Thunderbolt

When 4 Glyphs form a 5 by 3 node distance ratio to make an elongated “rectangle” on the Celestial Machine like below: 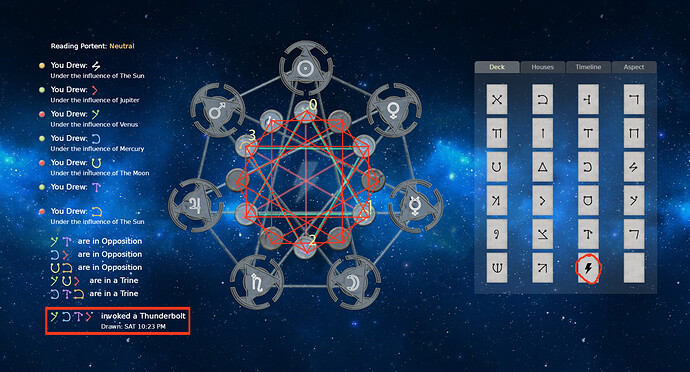 It will draw 1 out of the 7 cards in the Archon Deck: 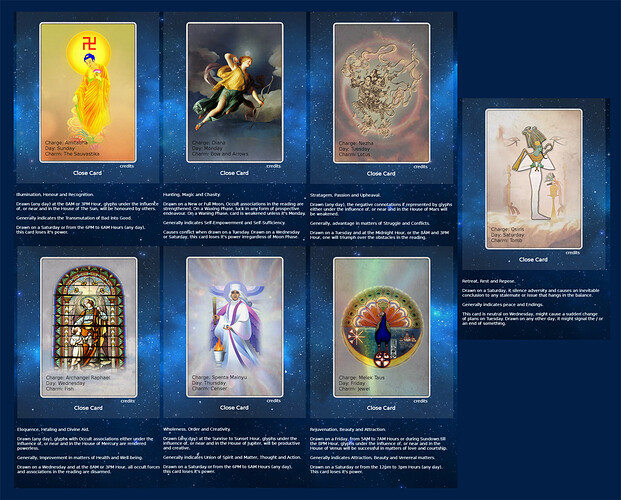 What determines their relation in addition to the reading/story generated, depends on what hour, day or moon phase (for the Diana card) the card was drawn when you generate the usual set of 7 Glyphs.

Will probably work another module: Phenomenon of Pairs next.

Nice concept. And arts are so cool.Is this only for pc?

Thanks alot for the compliment! Almost all of the deck art and illustrations are public domain material (paintings, old books, manuscripts and etc.) I initially wanted to engage an artist to do them all, but found someone who suggested i do this instead.

Thus far, the downloadable versions are pc only. The HTML5 Version at itch.io is the same as the downloads, just doesn’t have Save/Load and Screenshot functionalities.

To be perfectly honest, i have no clue how to make a mobile or smart phone game.

If you want to make a version for mobile.I think I can help you.

Thanks for the offer, i will take you up on it in the future. At the present moment all that mobile stuff just frankly don’t interest me atm.

I had all those “check if mobile” conditions already planted in the app, they just don’t seem to want to work! lmao! I can run VoSS on my IPhone, but there’s no sound, the mp4s don’t play and it doesn’t allow me to zoom in and out of the screen like most mobile games do. In the end i just thought: well … screw it.

edit: I also ran it on my IPad, the whole screen doesn’t scale, and wouldn’t resize according to the width no matter what i do.

Alright, i guess i got lucky and managed to make the HTML5 version of VoSS compatible for Smart Phone and IPad play. Even though i have to admit, it was a frustrating week trying to make it happen.

For those who wish to make games compatible for IPhone and IPad, take note:

That’s that i guess.

Added 7 new cards in the final installment of The Thunderbolt Deck Pool: The Elemental Deck 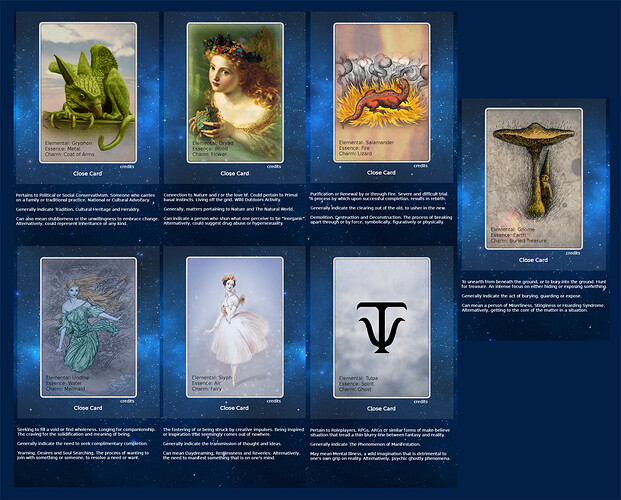 The Path of The Thunderbolt

The Archon / Charges Deck :
Reveals who or what is the underlying cause of the conflict.

The Ward Deck :
Reveals who or what started the conflict.

The Elemental Deck :
Reveals who or what is driving and sustaining the conflict.

The Thunderbolt Deck Pool thus completed with 3 tiers of 7 cards each, serves to reveal the struggle and dynamic in the opposition between the 4 glyphs that activated it. The presence of Thunderbolt activation in a reading tends to (but not necessarily) suggest interference or intervention from the supernal realms.