Hello everybody,
I am starting a joint development because its well known that we cant create a large content and precise game in less time alone. As a indie developer it takes time. And suddenly a new game idea pops up.
Here different components will be created by different person -

The game will be simultaneously produced in 4 types which is different climate like desert, grassland, snow, forest (negotiable). every one will get to publish one type with common understanding. Further modification can be introduced by the publishers itself to their game type.
Process -
The reason i choose this process because i dont want involvement of any third party.
every person specific task will be done in four stages sharing game file after every stage completed, in following order.
1 art stage 1 (basic - player, platform, 33% enemy)
2 event stage 1 (available art)
3 sound stage 1 (available events)
4 test stage 1 (available game)
Stage specifications will be provided as game progress. (first step will be game concept building by every ones suggetions)

Structure can be modified if very necessary after negotiation.

Interested people reply. After one week it will be scraped if not recruited.

I make pixel art, if the goal is realistic (=small) I may be interested. (Maybe not) My english is good but I’m very bad with promotion/social media.

I’d forget story-based games for the start, going for something more fun or arcade has less chances of failing hard, replayable rather than long, etc.

I didn’t really understand that thing about four times simultaneously in 4 climates.

This is something like a extra initiative, if you work with gdevelop for 20 minutes add 5 more.

I accidently come up years ago posts and i noticed collaborations had been started by many individuals. I just want to remind again my project files will be with everyone and no one controls it. Its just sharing of codes, images under a same game title. Every ones game will be its sequels.

This is what I made as starting point. (For a non-platform game)
Anyone with spare time who wish to join just show something more. May be a set of helmets.
Just to see are we willing to work. 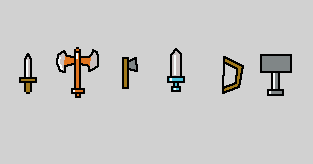