I’m making a Bullet Hell game and I have 2 ideas about it. 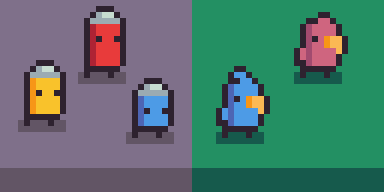 Not a bad idea. Although, I’m sorry to say this but the character concept for walking bullets has already been done.
Have you played the game, Enter The Gungeon? Well, the game has bullet characters exactly like that and they are much more deadly. Same goes with the birds with bullets, although in the game it was more of a boss that’s a bird that has lots of guns, but that’s it.
You could stretch out that concept a lot more though, I feel that one could work.

I don’t know anything about those other games but don’t think the fact that they exist should affect your choices. People who like playing those games are probably looking to see what other thematically similar games are out there. But I’m sure there’s other options for bullets anyway, maybe some ridiculous ones, haha: socks, lipstick/glue stick, worms, fingers/thumb (ew), a glass of something that sprays out the liquid as it travels etc.