I have a object with physics automatism enabled on it.
the object is on scene1.
when I go from scene1 to scene2 back and forth again and again then on probably 7th transition the error occues

“code.js:16 Uncaught Finished up all reserved function pointers. Use a higher value for RESERVED_FUNCTION_POINTERS.”

because on scene1 transition the object is not DESTROYING before going to scene2.

but still not works

I need a way to Destroy body from BOX2D world

Please help me out

Dude… You made 3 topics about the same thing? Why is that? You can edit your posts if you have more things to ask

I don’t know how to solve your problem, though.

I’m currently fixing the issue. With a simple fix, the scene can be changed without problem until another bug appears (approximately after 20 scenes changes). So, I’m now fixing the second bug.

Actually I’m on edge of releasing game so I need a quick FIX for this one.

Thank you very much

We are currently trying to fix the second bug, so don’t expect the fix because the next stable release of GDevelop.

There was “Stop Automation” action to stop the Physics automation on any object may be that can FIX the issue but I can’t see this action in current version of Gdevelop.

You won’t fix the bug by destroying the ball in the box2d world.

EDIT : I may have a solution for you. You can try to use the fixed js files instead of the one provided by the current stable version of GDevelop. It may not work if some incompatible changes happened but it’s worth it. So, put :

Thanks for fix but on execution it produces the following error 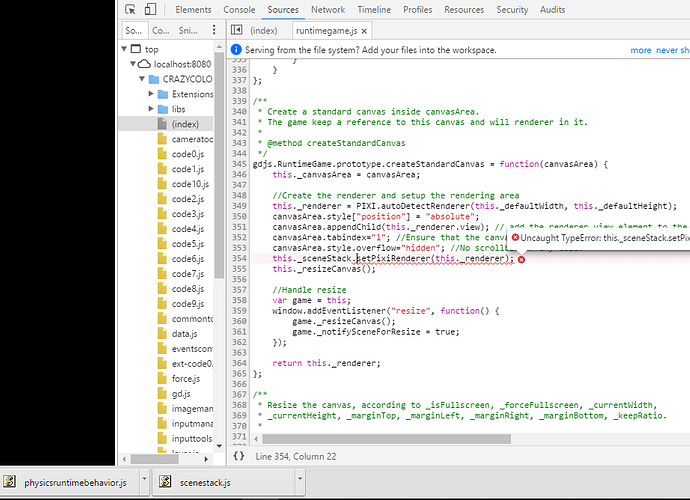 So, you will have to wait the next version of GDevelop.

So, you will have to wait the next version of GDevelop.

I have only 5 days to release the game. No time at all

Thanks for your help I have to find another solution

do this whenever going from Physics Extension Scene to any other scene.

Actually Gdevelop is inserting elements every time we load physics extension scene as sa array is global so it not destroys when we reload scene
sa.length == 20
when it overflows then it says
“finished up all the reserved function pointers”