Your mission in this Alpha build is to defend a critical asset from the horde of ants and flies with a fresh batch of units.

- Gameplay -
Gameplay in the alpha revolves around the “Battle Map” which is where were most of the action will be taking place.
Plastic Defense: Bugicide will eventually have two main phases. The first will be an overworld/economy phase where you will build armies, secure supplies, move unit’s into position etc.
The second phase will take place on the “Battle Map” where you will have the chance to deploy the units you have created in the first phase.
The type of modes within the battle phase will depend on what is happening in the economy phase (Defend, Disrupt, Escort and Siege).

- Sound & Art -
As this is an alpha, a lot of the assets are either not final or not currently implemented.

Thank you for taking the time to play. Please let me know what you liked or didn’t like about the game, it’s still in very early development so there is much to improve. 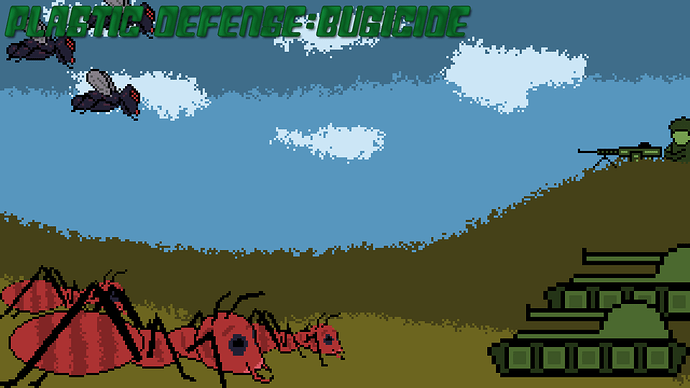 Deploy your plastic troops against the never-ending tide of bugs in this 2D top down strategy game!

I have been working on changes to the deployment UI and how units are re-deployed within the battlefield.

Deployment UI: There’s a lot of ways I can have this displayed on the screen; how it currently is, more RTS like down the bottom, hidden unless called requested (via a button), etc. but I have decided to go with a unit card system at the top of the screen that is heavily inspired by tiles like Wargame and Steel Division 2.
I feel this is a good mix of showing you the required information when needed, but not making the UI feel too bloated.

Re-Deployment: I have been working on changing how re-deployment works as I feel in the current version it’s a little too static. I am not looking for this to become a full blown RTS, but a bit more freedom in how units can move I think brings a bit more choices to unit positioning.

Today marks the first update for Plastic Defense: Bugicide.
The updated version can be found on our itch.io page and the changelog is below or on our latest devlog.

Thank you for the continued support!