After a good week of design and learning the GDevelop engine, I actually just continued adding onto my very first test project and added a GUI to it and then found art assets for it. It is a simple space side scroller where the goal is to simply evade enemy ships for as long as possible. The longer you last the more enemies, the faster they are, and finally I added missiles that actively track the player until they “lose sight” of you. 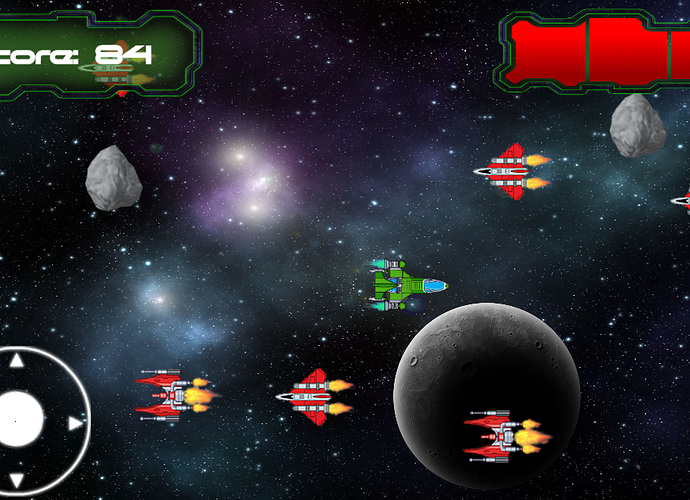 Honestly, it’s a little rough around the edges, it was completely a learning experience and any feedback would be great. Be as brutally honest and critical as you want because that’s the only way I can learn and get ideas for how to develop my current and future games!

I tested it and it was pretty nice, kind of addictive! Waited more action, though, like huge laser beams or something that I had to dodge (only survived to score 268 so don’t know what’s in there when I play further) or clearer enemy waves or something like that. About player controls: It worked pretty well, mostly. If you lift finger up from button and place it again, player always move backwards first and it sucks

I think little bit bigger ball (virtual joystick) could be better and no arrow frames.
And opportunity to choose which thumb you wanna play, right or left. Because now thumb hide some of the objects some time when play (okay I tried it again after write that, and it’s good in left. It’s just getting use to not swing your finger over the screen like I play it

). Every object should be higher in Z-order than player hp.

But after all nice game!

Good beginning, let me write down trouble i experienced on my alcatel onetouch idol 3 :

Hey thank you for the replies. I know it is a little rough and I only have one device to test it on, so knowing about the planet alisasing and the ships getting blurry definitely helps me a lot.

Originally I had the standard 4 direction buttons to move around with but I really wanted to challenge myself so that’s how I experimented with the virtual joystick because I had no clue how to do that haha, I’m glad it worked out pretty well. I get the issue of putting the touch down and the ship moves backwards by default it’s because it’s coded to move the ship in the direction that the joystick is relative to the the center of the ring and by default it is slightly to the left for some reason even know it’s actually positioned in the exact same X/Y.

Also the music I have been annoyed with for a while with it starting a few seconds after the level. I finally published it anyways with the intention of updating it later but I haven’t found a solution to the music problem and I am finding that other developers on here have the exact same problem. It starts immediately in my previews but only on mobile does mine delay like that

. If anyone has a solution for that I would be very grateful!

As far as the other details such as the latency and z-index a few tweaks and they should be fixable, thank you for pointing them out!

May I know how to stop the music background when game is over ?

I played it. It is a very nice game.

May I know how to stop the music background when game is over ?

Hey thanks for giving it a try! This was my very first project and I’ve actually forgotten about it for quite a while

It has an old version of Cordova that Google wants updated so I’ll need to update the apk anyways. I’ll try and update the music while I’m at it.

I received an email from Google a while back that the version of Cordova that Intel XDK had at the time that I exported this apk was found to have a security vulnerability. They said in not so nice terms to either fix it or it might be unpublished or unable to work on Android devices. I am getting around to it soon, simply re-exporting it with the new version of Cordova. That should fix it.