I love that you made everything PascalCase

That’s how you recognize a programmer.

EpicSleeper, you’re the one who started pascal case with DirtBody. Although maybe technically I did, haha with ArmLeft etc.

MrMen, it’s a really good story, I’m kicking (scratching?) myself that I didn’t think of the Bugs and the Diggers. And by WaterWoman, you mean like Rain? Although it could be from a watering can or hose too.

I envisaged WaterWoman as one giant drop, but maybe she regenerated by raindrops, a dripping hose or watering can. Destroy those before you can eradicate her (or in the case of rain, get an umbrella up)

Yes, but like SeñorSun, WaterWoman is a double edged sword, although in a different way. She has the potential to be destructive and wash DirtBoy away but she’s also what gives life to PlantGirl. Without the contact of the watered PlantBoy, she cannot live.

And think how good it would look when DirtBoy has to leave PlantGirl: he slithers out through the drainage holes of her PlantPot home.

I added a few things and got it working correctly. If I interrupt the cycle it doesn’t do any craziness. The main thing I added from yesterday was the highlighted line.

Update. And I’ve now added a remove Reset tween to the StartSwitch is true event. Although there didn’t seem to be any problems without it.

Oh, and thank you MrMen for putting me on the right path.

Eventually there will be other things going on like changing the y movement up just a little bit rather than resetting it. This gif shows it sinking for 2 seconds. The actual duration though will be a variable ranging in time, much longer than 2 seconds. And yes that is a wooden doll that’s drowning but it all works out in the end. The reason why the gif shows a jump in the x direction between the start position and reset position is because the doll has a horizontal and vertical sine movement.

When I put much longer times in, like five minutes, it’s once again taking too long. Will see what I can discover from troubleshooting.

I didn’t like the idea of manually sending the player to y300 to stop the player rising up after the tween and turns out the player does stay put at the bottom of the y tween if it has no vertical component to its sine behavior. That’s fine with me.

I timed it four or five times and these are the results.

I just don’t know what else to try.

Proper version:
I experimented with and without the highlighted parts as the simple version doesn’t have these. 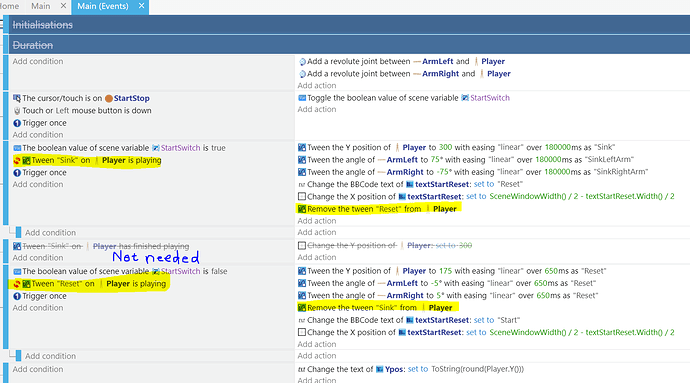 I’m ready to concede defeat on this.

Things I tried: deleting the objects and putting them back again, re-doing behaviors, reducing the file size and dimensions of the body/parts (that did help for shorter times such as 3 mins but not for longer times such as 10 mins, (the original pics were way too big btw)) substituting simple block images, putting things on separate layers, other stuff I can’t remember.

So in a complete surrender, I just added the things from the proper game to the test game. No copy and paste, all hand done. Events related to other things, behaviors, scene variables, text boxes, sliders, backgrounds etc. And tested a 10 minute tween each time I added something significant. It kept working properly.

As one final search for sanity, I ran two more 10 minute tests on the proper version, the first took 16 mins 45 seconds and the second one 16 mins 12 seconds.

This story is finally over. The slow down came back in the newer version. I kept working on it anyway and adding things.

So the problem was with time itself. After getting some advice in another thread about the nature of GD time, I ran the debugger and found that the physics revolute joint that was joining each arm to the body was using up 99% of resources and meant that my game was slowing down time as it tried to cope with two tweened revolute physics joints. My laptop fan was also running like crazy.

I deleted the physics behaviours and positioned each arm with the action ‘put the object around another’. The connection between arms and body worked just as well, the fps was stable, no craziness in the debug profiler, the timer was accurate and it was all quiet on the fan front.