Six months later, I still have the same problem and I still don’t know if it’s a bug or a logic issue.
Here is a dummy project so you can investigate and experiment.
The problem is with the tweening of the first spawned item.
Load any scene, click on the texts to switch scenes and observe the first tween.
Cheers
https://we.tl/t-tJkxVfveDX

This is how i do, maybe problem is with tween because Tween animation are async or issue is on the selection of the object. I don’t know very well.

But my eventsheet fix the your issue.
On right you can see number this is the order of execution of actions, its related to a personnal function called console.log() in actions.
(I do this for see if one action persist and avoid leak) 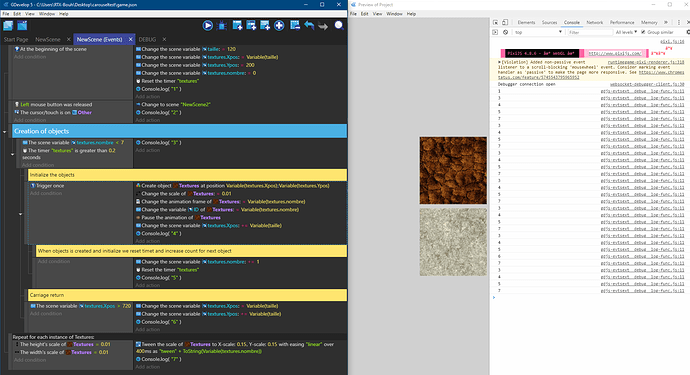 Loop for each can be also on top, and you can wrap creation and animation in one group

yeah, I would like to understand the logic of it, if there is one, but your solution works.

For some reason, the for each is not enough if you keep it in the subsection.
Awesome console stuff, I’ll try that… as soon as it’s in the extension library.