Why my character error? and how to fix it?

Why my character suddenly jumping everytime i relese movement key?

Can you post a screen shot of your events?

Sure, it’s my event 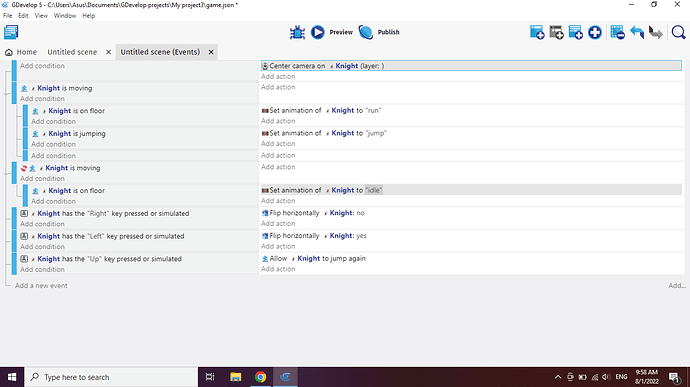 When you say jumping, you mean repeatedly, or just a one off small hop?

If it’s a small hop, I’d first look at the position of the origin of each of the Knight’s animations, and make sure they’re the same relative to the bottom of the image.

You have it where every time the jump key gets pressed, it re-allows jumping, even if the player is not back on land. I believe this is where you should change it.

That jump again is to allow double jumps (a second jump while in the air).

Also, the jump happens when the movement key is released, not when it’s pressed. The movement key release would trigger the Knight is not moving event, which is a change in animation. Logically this seems to be the place where the problem lies. And since it’s only changing animation, the collision mask or point of origin relative to the bottom of the image are the most likely culprits.