GDevelop heavily rely on OpenGL and advanced 3D features: you must have up-to-date drivers to properly use GDevelop, as we cannot workaround the bad implementation of old drivers full of bugs.

So if you have any doubt or strange crashes => Check your graphics card model, then go on ATI/NVidia/Intel website and install the latest driver

Type “about:support” in the address bar of Firefox.
If “GPU accelerated windows” is at 0, or WebGL rendering is false, you should dump your computer (or just your graphic card).

Pixi.js, if I remember correctly, should work without WebGL.

What if we’re running GDevelop on a virtual desktop?
I sometimes run GDevelop on Parallel Desktop on my Macintosh.

Use a real machine!

Joke aside, virtual machines are really useful, I use them a lot to compile GD on different platforms.

But when it comes to run games on them or software like GDevelop which heavily rely on graphical acceleration and the GPU, you are basically out of luck: they s*ck at it and you’ll probably get lots of glitches and strange graphical bugs that I couldn’t even fix if I spent 24hours a day working on GD. Better set up a dual boot with Ubuntu/Windows on your Mac or try to tweak your virtual machines until you get something properly working. But I’m not responsible for it

Sometimes you can’t use the updated or working graphics drivers. Like in my computer Toshiba decided not to release update drivers and to lock the drivers down. I don’t know why. I can’t remember how I got the Intel drivers installed, but I know none of the online directions were working. Another reason this comp wouldn’t play nice with win 10. Both theirs and Toshibas drivers suck.

I don’t get “crashes” in the scene editor but I do notice that objects placed in the scene sometimes visually disappear while working on the game in general. Has nothing to do with graphics on my end. Brand new Razor Blade Laptop with NVidia 1060 so its DEF not that for me.

If I execute the game via play button, then exit the game window, most of the time, the objects reappear. But its frustrating sometimes when I am working on the player in the events, and then need to change something in the scene to test and the player is invisible lol. Not in an angry way, but kinda like hey i know you are there I just cant click on you! lol

This post is very old, next time open a new thread

Are you sure the player is invisible and is not being occluded by another object (e.g. a background sprite) with a higher Z-order?

I would also suspect a Z-order issue, especially if objects seem to appear and disappear at random.

If you are creating an object with an action (rather than placing it on the scene in the editor), make sure you always follow the create action with an action to set the Z-order.

This post is very old, next time open a new thread

Are you sure the player is invisible and is not being occluded by another object (e.g. a background sprite) with a higher Z-order?

My apologies! I will surely open a new thread next time I promise

I have arranged the z_order of all the objects, as well as grouped them into categories in the object group panel when I started creating the objects along the way.

Character objects appear before the background object, and GUI objects with a high z-order of 1000, all with the same timing, and nothing is less than 100% alpha channel, so All solid colors too at the moment. My player object is at z-order 10 and background is at -1. Both do have animations, though, whereas other object in the game going through testing and placement have no animations/extra frames than the 1 sprite.

Maybe it is an animation issue? Because my run animation doesn’t work at all either, but my walk, idle, jump, and fall work just great

So I am not sure why else it is disappearing, BUT the background does the same! Strange, huh? lol Its not a too big deal since I can execute the game and close it out then they appear again most of the time. Just wondering if that was something commonly reported or not and if it was an active bug.

Can you share the project with me in a PM?
Also, check if the images are not indexed, you can check that in GIMP for example. GD doesn’t like indexed images, rgb only

It’s unlikely, but maybe the images are too big?, 60 backgrounds images of 6000x4000 can lead to a memory issue

Can you share the project with me in a PM?
Also, check if the images are not indexed, you can check that in GIMP for example. GD doesn’t like indexed images, rgb only

It’s unlikely, but maybe the images are too big?, 60 backgrounds images of 6000x4000 can lead to a memory issue

Sure, I will send the .json to you in PM. Thank you for checking it out!

I have updated my drivers and my project still crashing 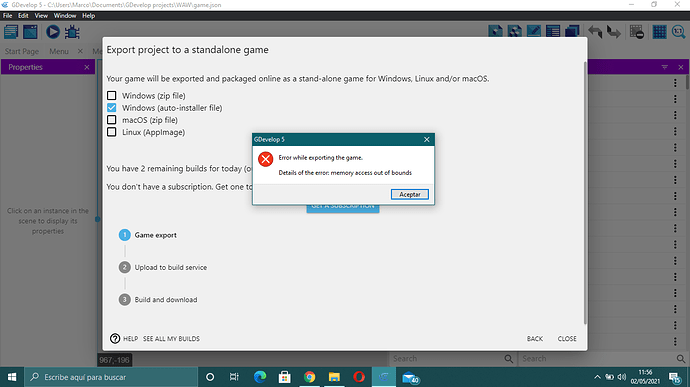 There is a link to my bug report

Insue in the editor preview How do I...?