Hi I have tried to make an endless runner by making a variable of the scene speed set to 4 that way I can compare the y-axis of an object and make it go to another position. The problem is that the scene already have used variables (direction variable) so it doesn’t work and the scene doesn’t move at all.
How can I make the scene move anyway?
Not the camera the scene.

Can you give a screen shot of the events you have already? We don’t know what you’re doing just by explaining it. 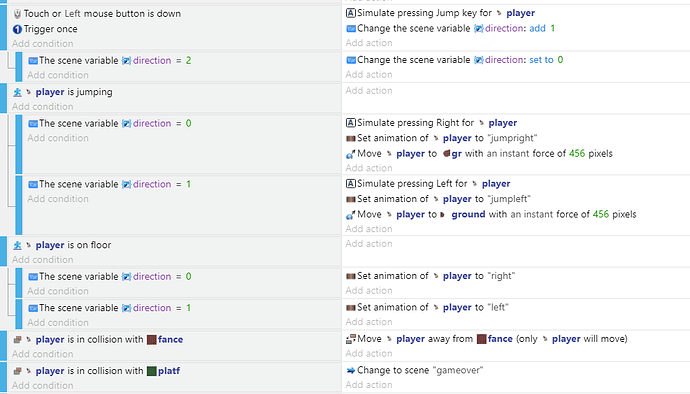 Where is the variable of the scene speed that you’re setting to 4? Where are you comparing it to the y-axis of another object?

I have deleted the variables because they didn’t work.
But can you see why it didn’t work.

The scene doesn’t move upward.
Probably because the variable are already taken.

No one will be able to help you here because nothing you’ve detailed makes any sense. You’ve got a snippet that sets speed to 4. So? Where are you using the variable speed? Where are you changing the y position of gr?

We aren’t mind readers. You’re going to have to be a lot more informative about what you’re doing if you want our help.

If I put the variable in action the scene supposed to move up to my knowledge.
As I understand it when the scene goes upward the position of the GR changing according to the scene position.
Unless I supposed to make the GR move, so he changes position on its own?!
Sorry for the mass I’m still new to this.

How are you expecting the scene to move? The best way is to move the scene camera, which you aren’t doing. I also cannot see where you are changing the position of GR. You have to put actions in place that move GR. It won’t move by itself It has to be moved by something, usually being an action.

That the entire level so far.
I did the camera already.

Yes.
But I want GR to repeat itself after he is go down.

Ok I will change that.
Thanks.