Hello all,
I would like to propose a revamp for the events editor.

Why a revamp?
Because of two simple reasons, complexity and management.
In the current editor, with increasing scopes of games, the editor gets complex and becomes tough to manage.
With the proposed changes, the original way of coding in the “list” will change to coding in “groups”. This will result in better management.
For each group, there will be expanded views, which will further simplify code flow and will allow more features to be added like breakpoints, watchpoints, and parallel computation.

For screenshots and small brief, Check out the prepared google doc here
https://docs.google.com/document/d/1uxXlddy9_JW4na7SyR-i6LEMHT-bJBDHQVZNTVBhhjY/edit?usp=sharing

This change will also make the editor open in a new window, which will allow event editing along with changing scenes on the side.
For people who are already working on projects, there will be a legacy option to switch back to the current editor so that the project progress isn’t hindered.

I would like to have everyone’s suggestion and review on the revamp.
Thank you.

I think the key benefits for this are:

Some points I would bring up:

Hi,
My opinion about this revamp:

Now, regarding the screenshots…
First part:

With all that said, I would like to see a mockup with a bigger and more complex structure (several levels of events, children and groups).

Each empty space adds a burden for navigation. The small space you added between each group, once applied to a twenty-page events sheet, would amount to some 2-3 pages of empty space in total, I guess, so about twenty or thirty mousewheel turns? And the smaller the screen, the more navigation required, although GD should be compatible with laptops/tablets.

,
What we can now see in one glace, would then want us to scroll and navigate more! I think when the editor becomes complex, its because the user doesn’t used groups and comments, if they are used properly then everything is managable, using groups and comments in the right way is making our project manageable, and we will need to add them no matter how the editor looks!

Can the new features like breakpoints, watchpoints and parallel computing be added to the current editor itself, in the current editor, can it happen that the event block change the color or the lines joining the blocks to show which events are to be parallel computed, and also the other in similar way, it will make it more compact and increase the speed of development.

As mentioned in my original post, I believe that adding this as a toggleable view in the main GD5 options would make it so people who prefer this method have access to it, and those who don’t retain the normal event sheet view.

However, I wonder if there’s an alternate path for this to get the best of both worlds. What if this is an enhancement to group functionality rather than the entire event sheet?

i.e. After adding a group, there is a button on the right of the group that displays a “Grouped Events View”. Clicking it would display all of the events in this group in the style being presented above? That would maintain the main event list functionality, but gain this style of flow-based event display when desired. Obviously, it’d still need the parent numbering for groups and events as well.

Hello all, I will try clearing up most of your questions and problems with the following post.
@Silver-Streak
The numbering system will be as follows:-

@Gruk I understand your suggestions and the issues you brought up with the idea. So here are the changes from the previous idea.

Prajwal(Sorry I can’t mention you) Yes, using the management tools is handy enough but, GD uses verticality to its advantage whereas a lot of devices have horizontality as an advantage. Using flow graphs would decrease verticality use and increase horizontal use as well.

The new features like the points can be added into the current structure except for parallel computation which would need tree structure to fit in.

@Silver-Streak I thought of the same idea. To get the best of both worlds, I will hence, propose only two changes.

Doing so will also eliminate the need for a legacy option as the flow charts will only show upon second expansion.

I have added an update of screenshots for how groups and sub-groups are done.
@Gruk Sorry, I wasn’t able to do more complex structures due to a shortage of time.
UI changes might still occur for collapsed views to look as same as the current editor.
https://docs.google.com/document/d/1uxXlddy9_JW4na7SyR-i6LEMHT-bJBDHQVZNTVBhhjY/edit?usp=sharing

Keeping in mind that not everyone uses groups, I still think it would be best if its a “deep dive” button on a group to show up your new view. However, that’s just a suggestion.

It will be exactly how you mentioned. Imagine a completely collapsed event editor. Then,

Couple of notes regarding the updated mockup:

Back to the theory now…
I agree that too much space is often wasted horizontally on widescreens, even though sometimes, that empty space is welcome:

To me, the solution to this widescreen issue is to do what some of the other engines do: display the scene on one side, and the events next to it (and I would leave the current double tab system for small screens).

Hello again.
Back with some more updated mock-ups. Hope you like them this time.

I found a simple solution of using a “branching” tree instead of a “linear” tree. 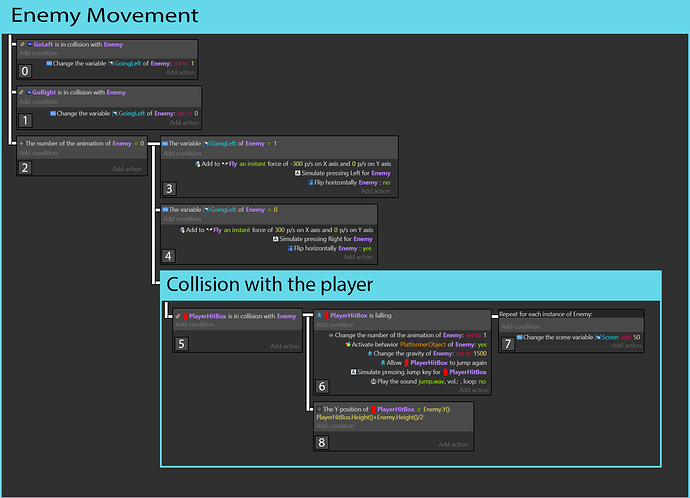 I still have trouble with having a child (#7) on the same level as its parent (#6), but on the whole, it’s much better.

But looking at your screenshot:

I have to say I’m not used at all to working on flows like that, so perhaps it’s just me.