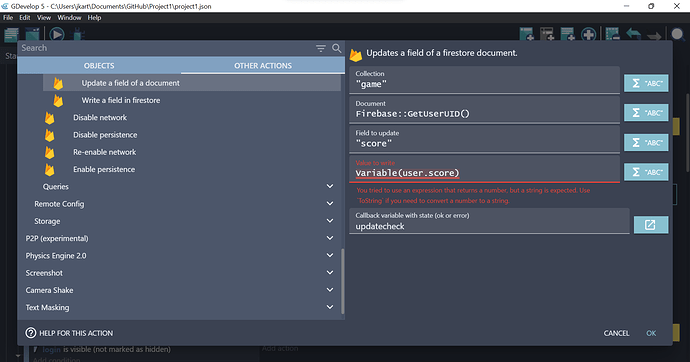 I need to update a field(score) in a document but I can’t use number variables. Instead of updating a single field, if I update as a whole document( both name and score), it works. I don’t want to upload the score as a string using ToString(). Because if I upload the score as a string, then I can’t get the leaderboard to be in descending order since the score is a string now. So I want to update the field(score) as a number variable. How to do it?

But this stores the value as a string in the firestore document. And because of this I can’t query the scores in descending order to display the leaderboard.
I want it to be stored as a number.

I don’t know much about firestore or firebase or other stuff, but even if it saves as “15”, it can display that text and change it to 15. You can convert a text into a number using ToNumber(string)

So there are no option to store a number to Firebase

[SOLVED] Firebase LeaderBoard How do I...?

There is a yt tutorial : https://youtu.be/KBh64f0QInY

If you use “Get a field” your variable stored as a string will be automatically a number, without converting.
I don’t know what about queries, have never used them.