I have four blocks that shoot. I made one for left, right up and down and a blank one I call did with no arrow marking on it just for the middle when I want to stack them up and make it look like cool. They each are platforms. now, two or three days ago I was working on my 9th level of Larry’s World. When I saved and shut down my computer. I had all four shooting blocks working perfectly. When I went back to call up my game gdevelop5 couldn’t find it. So I then discovered that it had gotten corrupted during the last save or something and it was an empty json file showing 0 bytes. I do not remember how I got the objects in question to work, I just remember it was an event with a sub event. Repeat for each object like the coins in the platform example. Every shooting block on a given level would shoot the direction it was supposed to every 5 seconds on a timer. I even had it so they would destroy outside of the screen bounds, and also if they hit any platform.

I have gone back and tried everything I know to do, even using other objects instead of my projectile sprites and even though I tell it add force angle whatever direction for 100 pixels per second, nothing moves. They appear in the right spot but the force angle action does not move them.
Any help would be greatly appreciated. I had many killer levels I will try to remember so I can dupliucate them. Thanks in advance. 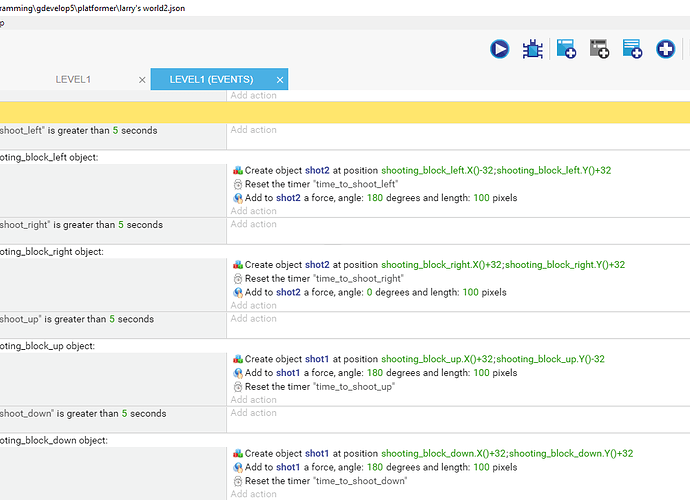 I was having similar problems. I can’t remember if you need to have dampening set to 1 or zero, but You might check what it is now, and change it. That was tripping me up for the longest time. If it is already set to 0, try reversing it an putting it to 1 instead.

Exactly, as you add the force only once you have to put a damping = 1

Thanks guys it worked. I am ever so grateful. Now if I can just make enough levels, it should be a killer game.