How do I make a 3d room effect in g develop?

Kinda like the sphere effect in construct 3 if you look it up. A perfect example is in the Five Nights At Freddy’s games with it’s 3d looking images. How do I make this effect in g develop?

FNAF is using prerendered images that it just scrolls through. Unless something changed in the later games, it is not doing any special images, just rendering a flat prerendered image that looks slightly conical.

I tried making real simple kinda fake 3d fps game with no knowledge and no art experience and ended up with this: 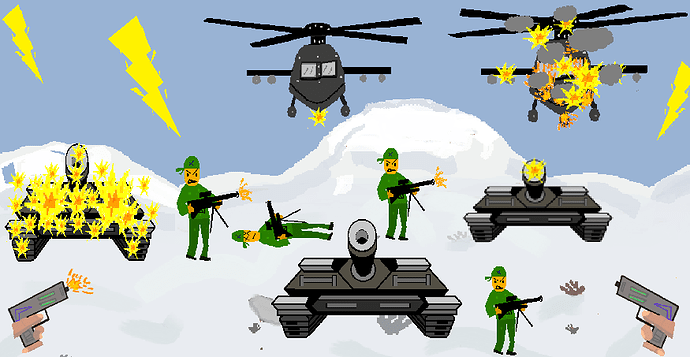 A game I made few years back. It's hilarious 🤣🤣 what I made back then.

Made in few months from totally no experience in Gdevelop.
I think I horribly failed!!

I know this was a month ago so it’s kind of a late response. But in Five Nights At Freddy’s, the original games aren’t just using flat images. The images are kind of obviously curved, so much so to the point where a lets player wouldn’t notice the first time they played the game that they’re actually just looking at an image. It’s not just a flat image on the screen. It looks like it’s real time 3d but it’s actually a pre rendered image but with a 3d effect applied to it to make the image look like it’s 3d.

The image itself is a flat image made in a 3d modelling system like blender to already appear conical.

They are then exported as an image (which is flat as in not a 3d model), then imported into clickteam fusion as a flat image (meaning no filters or effects are applied because the image exported from blender already was curved).

The game engine (clickteam fusion) is dealing with a flat image file. The engine is then just scrolling left and right through the prerendered image.

Perhaps he implies a spherical effect as here: ClickTeam Fusion 2.5 - Five Nights at Freddy’s - Scrollings - YouTube
This is “Perspective object” - perspective effect on top of all images.

If you look at the last few frames, you can see that the corner of the image is still “stretched” looking to the right/underneath all of the purple in the editor. The source image is already conical. The perspective function appears to just be their name for the camera.

That said, if you don’t want to stretch your source image for whatever reason, you could probably use a displacement map for the same effect. You’ll need to make your own map that meets the needs in this instance.