How do I make a Kyntt/Zelda type camera?

I am trying to get the player to move from one end of the screen to the next and have the camera move its position 1280px to the right or left and or move 720px up or down. the desired result is in this screen capture of a game called kyntt

This is my game

see how its not that 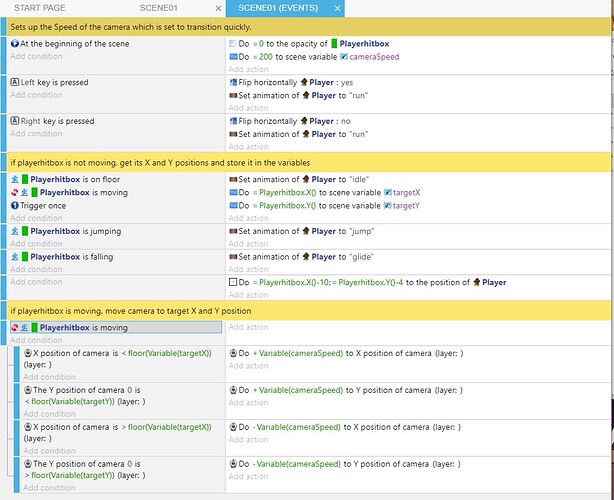 This is my code at the bottom “Playerhitbox is NOT moving”
when I stop moving the player, the camera moves until he’s back at the center of the screen.

What I want to happen is when he approaches the end of the camera the camera shifts to the next area on the map.

Should I make a variable that calculates when the player is at the edge of the camera?

Presently creating the scene variable should do it.

Is there a way to detect the player controller (Playerhitbox) is at the edge of the camera screen and the camera shifts either left or right to the next part of the map?

i have a way but its not the best, try placing boxes at the edge of the screen, set the boxes to GUI the when the distance between the player and the hitbox i within a specific range set an action to move the camera

In my game Tundmatu scene width is something like let’s say 400. When player x position is greater than camera x position +200 → +400 camera xposition.