How to make simple enemy AI (No zombie AI)

. Yap~ Just like my title said, I want ask this question.

Recently, I making like Call Of Duty’s game, graphics was started and made some, but I stuck AI system, this thing…

How to make enemy shoot near enemy, how to set way point?

Hope have guys help me.

Btw, hope guys can send me example or function process, I don’t want a lot text, because my English so bad, and I easily confused on a lot text.

How to make enemy shoot near enemy, how to set way point?..hope guys can send me example

Example is included with GDevelop.
File => Open an example => BasicArtificialIntelligence.gdg

,Er~Thanks dude and sorry I miss that example…

I back to AI’s waypoint problem, I very confuse now…

Also I don’t know how to use them.

The AI example is using the stock movement actions (forces) to move the AI objects, I don’t think any physics engine involved in the actual calculations but I can be wrong. But in case you plan to make more advanced AI, you probably better off with pathfinding,

I don’t know how to use them

I don’t want a lot text, because my English so bad, and I easily confused on a lot text.

So, I’m not sure if it worth the time to explain in detail how the AI works or how to make one.
It is not that simple really, if you are new to game development in general, you may need to get familiar with different concepts first to get the idea.

But let me try to explain the example in a simple way:

If an enemy is alerted because the player is visible to it, the enemy simply start moving toward the player and that’s it. After some time, if the enemy can not see the player any longer, it is going to stop.

Thanks you so much, ddabrahim.

My currently game’s concept is like Battlefield combined Call Of Duty(Just little like), choose your kit, and battle for skirmish , but without vehicles. So I want making alliance AI and enemy AI like Call Of Duty.

(PS: I know this is not very simple, but I want try new thing.

How to let AI can choose the new waypoints their want? 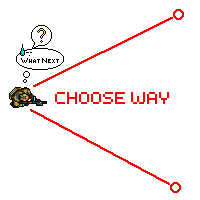 How to let AI when waypoint is end way, will continue moving not stay current position? 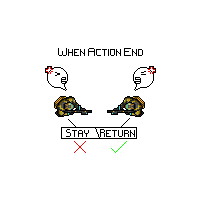 They are my currently problems, hope somebody can help.

(PS: That soldier is my next project’s character, called “Scout”.

How to let AI can choose the new waypoints their want?

In case you are using the Path behaviour, you can just simply change to a new path whenever you want.
In case you want it to be random path, the easiest way to go is name the paths you have created using numbers and simply generate a random number, then convert the number to string using the ToString() expression.
So basically when you switch to a new path, as path name you can do ToString(Random(5)).
It is going to pick a Random number in range 0-5 and in case the name of path is in range 0-5, it is going to pick a random path…

In case you are using the Pathfinding behaviour, the only thing you need to do is change the position of the destination whenever you want and the Pathfinding going to handle the rest…

How to let AI when waypoint is end way, will continue moving not stay current position?

In case of Path behaviour there is a condition to test if the object is reached the end of the path, then you can pick a new path or invert the path. So basically if you want to create a patrol which is moving back and forth on a Path, you can just invert path whenever the object reach the end of it.

In case of Pathfinding, there is a condition to check if the object reached it destination, if it does you can just set a new position for a destination. But in case you want to create a patrol you need to make sure there is no obstacle between the start and end position otherwise the pathfinding may pick an alternative route around the map and just ruin the patrol unless it is what you want, to make the patrol keep walking up and down on random routes. In that case pathfinding is the better option imo.

I go to check it up.

I have problem here.

Also I want let AI do their each action not together(The same one object). So how can I do.

I have problem here.

Also I want let AI do their each action not together(The same one object). So how can I do.

The problem is that when you working with instances of the same object there is a good chance your program simply doesn’t know which instance you are referring to. Maybe it obvious to you but not so much for a program…

You can solve this kind of problems by using the “For each object” event. This is a special event that is works similar to a standard event except, it is going to test the conditions and trigger the actions individually for each instance of an object.

Unfortunately at the moment I don’t have time to explain in detail how to use the For each object event and Object linking extension The actual solution also depends on how did you actually designed your AI.
Maybe someone else can help you with that. If not, I recommend to try to get familiar with the use of this two features I mentioned by looking at the examples and practising.

Thanks~Currently I’m student, so I will take a time to test your function.

I know this is an old post, but it approaches an issue I am trying to address at the moment ([Solved] Approaches for walking an arbitrary board square by square?). I am definitely giving it a try.

I like very much the idea of shooting “view bullets”. How would you define how far they would go in case there is no obstacle to hit?

In case someone else end up here in the future: [Solved] Approaches for walking an arbitrary board square by square? - #6 by Gruk

Very useful info, thanks! I’m glad I scrolled down and found this thread. Definitely learned some significant concepts for the enemy AI. I think one thing I’m unclear about is how to make the enemy do random attacks but I’m pretty sure that ToString(Random) is a clue!

I think if I set the ToString(Random) to the attack animations of the enemy, it should execute a random attack? Here’s my related thread >
https://forum.gdevelop.io/t/enemy-ai-for-scrolling-beat-em-up-style-game-example-code/25989/5