I know basic how to write/read into a storage and I am using ID counter, here is my simplyfied test version of what I have done so far: 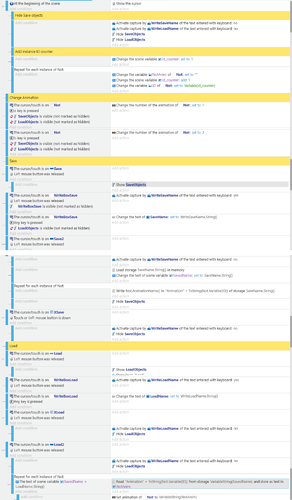 But how to make that the player can write a name for the “savefile” and later find it? It is basically the selected animations of many instances of 3 different objects I want to save.

Here some thoughts about how I possibly(?) could achieve what I want and questions about the steps:

Naming for saving
So if I have a Text Entry and a Text called SaveName, I activate capture by Text Entry and change the text of SaveName and write to that storage. Then I try to load from it by putting the same text in LoadName:

And finally some more questions:

If anybody knows an easier way to do this, I am very open for suggestions!

And I am also very greatful for answers to any of my questions.

Can’t answer all of these, but I’ll tackle the ones I know:
Loading:

All of the answers above are conceptual. You will need to make sure you fully understand variables and expressions before you try to implement them, and I strongly don’t recommend copying and pasting anything I have above into your events, as they won’t work. (it’s nearly 5 am and I am too tired to look up the exact naming). However, I hope it helps. I know all of the above will work as I’ve done all of these things in separate instances in the past (not in the exact same context, but the exact same type of events).

Thank you for your answers! I am impressed you are so dedicated as to answer at 5 a.m.!

Loading
2. No, you are right, I do not necessarily need to have the storage name as savename, I could use the system you are suggesting, but I would still need a system to check which storages are already “occupied” (and ask if player wants to overwright it). If I would like, say 18 different Saveslots, it would be rather much work to do the programming separately for each. Well, I suppose it is (too?) complicated anyway…

Maybe it could work somehow with a variable, if it is < or equal to some other variable, then add one system…? That would probably require some reading before showing Saveslots, and add the risk of doing something wrong or going in circles. Variables apparently can be used in group names, even if i don’t completely understand how and all the possibilities with that. I would prefer a system that is safe, that if some reading/writing goes wrong (or GD just doesn’t react on some click, which is unfortunately not that uncommon I have noticed), it won’t ruin everything that is saved. And some test if the saving was successful would be nice too.

For loading:
I may be misunderstanding the question. You shouldn’t have to do coding for each save slot. You do the coding once, but set it up to dynamically select the save slot to load based off which the player selects.

(e.g. Your saveslot variables are named “SaveSlot1”. Your player selects slot 12. You store the player’s selected slot as a variable “PlayerSelectedSlot”. Your events are set up to do “Load game data from ToString(“SaveSlot” + Variable(PlayerSelectedSlot))”. This will then work regardless of which save slot is selected)

For your question on the button released: The idea is that you use “Mouse Click/button selected/etc” to actually activate the button, AND the “Button Released” variable has to be true. So the action to ACTIVATE your game buttons is the mouse click action, but only if the mouse button has been released before. And you immediately set “Button released” to not true as part of your game button actions NOT as a separate event (so it only gets set to not true as part of your button activating).

This means, your first game button click works because your mouse button had been released before, however it cannot immediately activate the next button (once visible) because you haven’t released the mouse button yet. If you do release the mouse button once the second button is visible, it won’t activate until you click again, basically.

The idea is this “must be released” events prevent continual triggers.

Thank you for your answers! I am not sure I quite get it though…

This is what I have worked up: 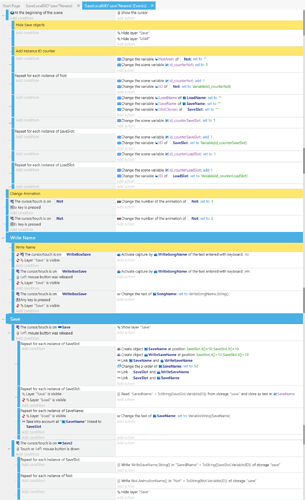 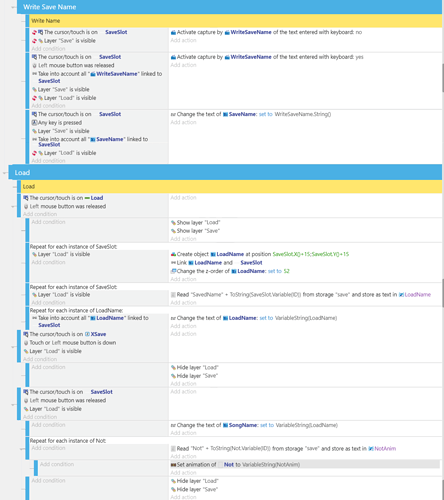 And Preview like this, the white boxes are my SaveSlots: 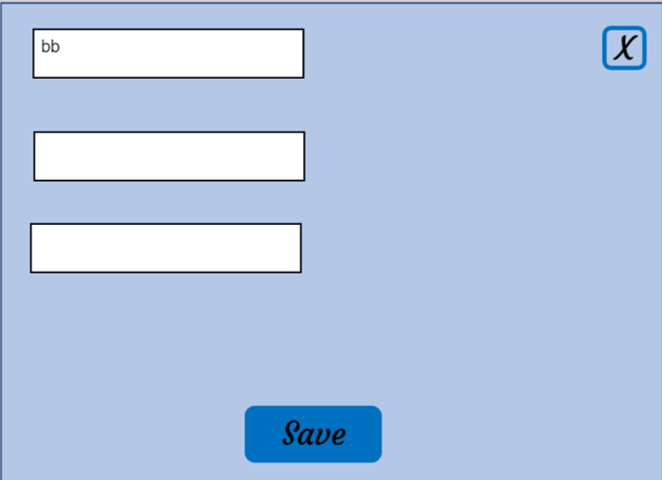 The problem is, whatever I try to code, it will just change the text of the first slot and whichever slot I then click on, it will load the last saved text and animations. I tried also with a “if cursor is on SaveSlot” and “Left mousebutton was released”, set Variable ChosenSlot to SaveSlot:s variable ID" and then: “repeat for each instance of SaveSlot” IF "Object Variable SlotChosen of SaveSlot is = SaveSlot.Variable(ID) then read from “SavedName” + ToString(SaveSlot.Variable(SlotChosen)), but it doesn’t work any better (and usually not even changing any text then).

I also tried directly with “cursor is on SaveName” and an ID for SaveName, if the linking between SaveSlot and SaveName might be the problem, but it seems it is not possible to check if the cursor is on a textobject, as it is not working to change the text that way…

I hope this explanations are not too messy… Any ideas what I might be missing are highly appreciated!

I think is repeating all the time, try to add Trigger Once on each event when the cursor is on, this way you ensure the event runs one time when the object is clicked