My speed will increase after x seconds.
How do i increase jumpspeed, fallspeed, gravity so that movement is the same only faster?
I mean having the same vertical height of the jump, same lenght of jumping according to my movement speed.

Come on guys! Nobody?
I’m close to finishing my first full game

In case you have the behavior activated, you should have all the events to set falling speed, gravity…etc manually: 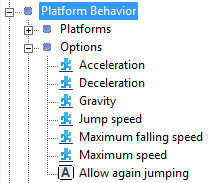 In case you want to increase the acceleration speed for example by 100, you can use expression to get the current speed and add + 100 to it

Alternatively, you can store default values inside variables and use the variable instead of the above expression and also in case any time you want to decrease the value back to default.
For example, in case you store default acceleration value inside a scene variable called “default_acceleration”:

Tnx for the reply but it’s not the answer i was looking for and i understand what You are saying
Let’s say i’m making flappy bird. At some point i want to increasse the speed. How do i do that? How do i increasse the speed of the game play.
I’ve tried with a difficulty variabile as so: speed = 250 * difficulty, jumpspeed = 600 * difficulty… Etc, but that it behaves different. The forces are not proportional

How to speed up gameplay depends on how you actually designed the gameplay, but I have just tried what you saying and what I’ve found was, the jump speed was always too high compared to movement so what I was doing is decrease the jump speed using a formula:

In my test by using this formula for the jump speed it seems to work.
Every time I was increasing the difficulty (by 0.3) and use the difficulty value to increase the speed, the movement and jump speed felt proportional to me, but it might be just for me in my test.
If it doesn’t work for you, I don’t really have any better solution other than, set the values manually one by one for each difficulty level.

Thack You buddy, i gues i’ll have to manually Set each speed at each difficulty level. The problem is i need it to behave exactly the same.
I’m making a game like geometry dash with a difficulty system that gradually increasses

Lizard’s reply in this thread may help:

question about jumping? How do I...?

You have to modify the max falling speed and the gravity, if your character jump fast, it needs to fall fast too

I’ve tried it.
What i wanted to know was what is going on in the engine, what 1500 gravity and 250 speed actually means.
Tnx anyway.
I’ve manually Set the parameters for each difficulty.