New to GDevelop, will it work for what I want?

I’m just getting into this sort of thing. I’ve been developing a set of rules for a tabletop space combat game that I feel is becoming too complex for pencil and paper. There are a lot of background mathematical calculations I’m incorporating in order to make certain elements of the game more realistic (or at least more interesting to me). Things like a complex damage model, power distribution systems, and mass/thrust interactions. In addition, I feel that the scale on a traditional tabletop battlemat isn’t large enough given the speeds that might be involved in this sort of game. So now I’m looking into options to try to develop it into what I think should be a fairly simple computer game.

After doing a little research on the subject, I’ve narrowed my options down to using GDevelop, Monkey X, LOVE (Lua based game development tool), or Roll20 (an online web-based RPG gaming engine). My first choice is GDevelop, as I think it’s probably the easiest (except maybe Roll20). Unfortunately, doing some looking through tutorials and such for this program, it seems that people only make Asteroids clones and side-scrolling arcade and platformer games.

What I’m more or less wanting is to create a board game with an infinite hex-grid map on which to move starship tokens around, with rules that restrict the movement of the ships based on a series of calculations made in the background. In addition to the map, it would also have a set of menus or info panels for creating ships and storing various bits of data for those ships, as well as displaying and interacting with things like power distribution, damage control, and weapons system control. Not sure that describes the game too well, but perhaps it’s enough.

So my question is this. To those of you that know how to use GDevelop, is it the right tool for what I’m trying to do here? For starters, I’m not finding any way to make a hex grid. I have some advanced rules for a grid-less movement system, but I’d rather not do that if I can help it. I just hate to spend time learning how to use the program only to find it’s unsuitable for my project.

I think the problem is the hexagonal grid, as GD doesn’t support it you should make the calculations by yourself, the conversion from-to multiple coordinate systems if you need them (offset, axial, cubic), the pathfinding system in GD is square-grid based so you’ll have a problem here too.
In summary, I think GD is not the best tool to do it… would be extremely difficult

I have been making a board game in GDevelop recently and it is now nearly finished. I have some conclusions about GDevelop for board games and also programming board games in general (this is the 2nd board game I have programmed).

Board games are, in general, surprisingly hard to program. It will be a long and difficult road to get your game implemented, in any game engine. Bear this in mind.

GDevelop was fine for the game I am just finishing up with, and would have been fine if the game used a hexagonal grid. All aspects of the board game are generated by functions called at the start of the scene, not placed into the scene on the grid. You would have to do this anyway if you want an infinite hexagonal grid. i.e. It should prove to not be a problem that the game is on a hex grid. You will have to get used to an offset that is different for even rows than for the odd rows though.

The game I am doing has custom boards (you can design boards then play on them), custom piece positions, an AI opponent and the ability to play the game with a full chess set instead of the standard game features and all of that was fine in GDevelop.

However, you haven’t provided much of what your game involves. Is it kind of similar to Star Wars X-Wing, but with ship movement on a hex grid? Anyway, if you can provide more description of what your game is (you can PM if you don’t want to put it on the public forum), then I can give you a better answer as to if GDevelop is appropriate for you.

My current answer is GDevelop will probably be okay for your project, but your project will likely be difficult in general. 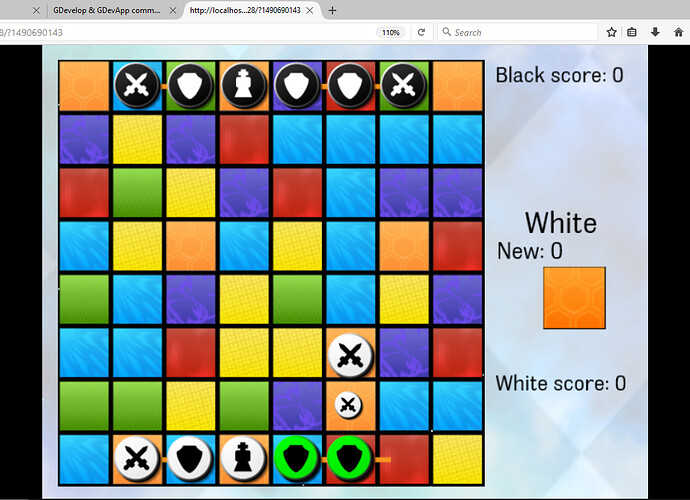