P2P: 1st tower gets placed in correct location but not the rest

I’m working on a P2P game and been trying to fix this issue for a few days now. When I place my first tower it gets placed on both the host and client game. But when I place the second one, it seems to place it properly on the game window I place it in, but the other game window it places it in the same place as the first. I been working on this bug for a few days and went through the tutorials but still cannot figure out what I am doing wrong. I tried many different things to get it to work. But I am at a loss on what I am doing wrong. I included a screen shot of the events. Anyone know how to fix this? 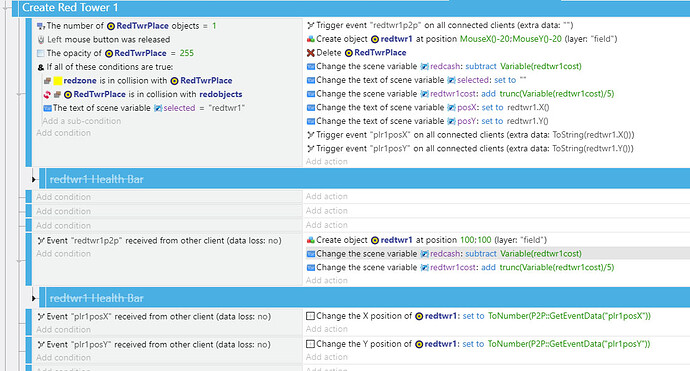 Have you dismissed the event as handled?

I tried that to. But that didn’t fix the issue. I never used that so maybe I used it wrong. I could not get it to work. So I gave up on that after trying everything I could think of.I really wanted to let players place the tower where the wanted. I ended up just using the technique from a p2p example using checkboxes and basicly went from their. So I am stuck in pre-placements for now. Not what I wanted but it’s atleast allowing tower placement for now.