I’m working on a top-down shooter. Right now the player, enemy, and projectile are just squares. Both player and enemy use the “Damage” behavior. My event sheet is simple: When colliding with the enemy, the projectile is set to damage the enemy, and destroy itself. The collision is working fine. The projectile destroys itself, but does not damage the enemy unless the player and enemy are colliding with each other. This happens regardless of what the damage amount is set to. I’m comparing my project to the “Conviction of Gun Dude” example project, and it’s pretty much the same logic. Has anyone run into this issue?

Could you send us some screenshots of your events? That may help us determine the issue. 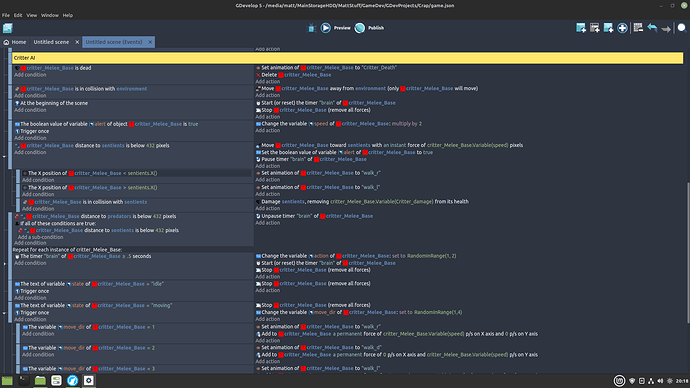 Okay, and I have an update. It IS actually dealing the damage - I set the enemy to destroy itself once it’s “dead”. Before, it was set to stop moving and play it’s death animation, but kept acting normally even though it’s technically “dead”. It works, but I’d still like it to play the animation. Do I need to set a timer before deleting the enemy?

It works, but I’d still like it to play the animation. Do I need to set a timer before deleting the enemy?

You need to do something different here, otherwise you’re just starting the ‘critter_death’ animation, then deleting the object (so the animation can’t play):

There’s an “Animation finished” condition that might work for you instead of a timer: