Hello everybody, me again.

I’m working a a roguelike game, and I would like to make some kind of an inventory system for the collectible items and upgrades the player finds during the run. I want to make it so that the item only applies it’s buffs and effects while the player is carrying it. This inventory system will be a little simpler than the inventory example in GDevelop, as this system, when a menu button is pressed will mostly just display the items you currently have and the order you collected them in.
Examples of this include The Binding of Isaac’s and Enter the Gungeon’s system, showing the player what items they have, and what order they were picked up in. I provided an example of Isaac’s system below (The items that Isaac collected are displayed in “My Stuff” found in that order. Also, note how they are also displayed on the right side of the screen.). 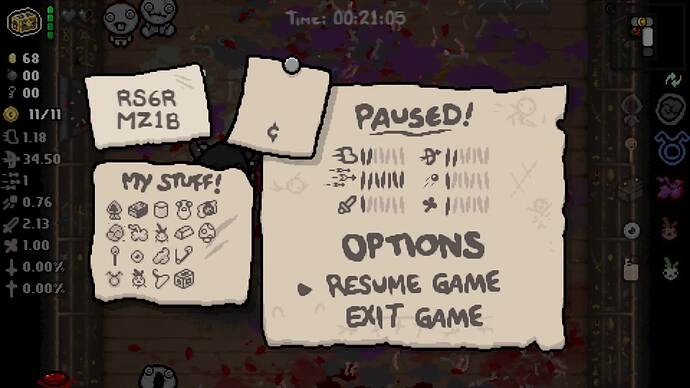 Notes: I am going to include a hidden menu that shows the inventory when pressing a button. I don’t need the tutorial on how to make the menu. Just the system.
Also, the player will not be able to pick up the items in the menu and drag them elsewhere, mostly because there is no point for it in my game, and to simplify things a bit. It will only be for displaying items.
Furthermore, I plan to add a system that allows players to drop the item in their inventory, thus losing it’s effects and stats, but for now, I only needs some help on making the system work first before I add on to it.
So… can somebody please help me out as soon as possible? I’d greatly appreciate any help I can get! Thanks to any helpers in advance!

hi maybe you could use a layer for the menu/inventory. You csn have layer hidden and show when you press the desired key you show the layer with the menu/ inventory

There is an example of an inventory in the wiki, I don’t remmember where is it.

well i said there is an inventory example in the wiki

Yes, I am aware. However, what I was asking was if there is a way to make it so that items in the menu are organized, and placed in the order the player collects them in, like in the screenshot?