The post title is horrible but I’m not sure what the proper term for this is. Basically, when points are added to the score, instead of the score in the HUD immediately adding all the points, it would quickly go through the numbers until It reached the new total. Does that make sense?

I tried holding the new score in a variable and then having the score add 5 every 1/10 of a second until it reached the new score…but that just looked like a blurry mess.

Any ideas on best practice for this?

I like what OongusBoongus did, I was thinking of something completely different which would be much more effort and probably not worth it. It was to make a vertical pic of numbers and actually have them move when the score changes with some kind of reset when it had to go from 9 to 0. 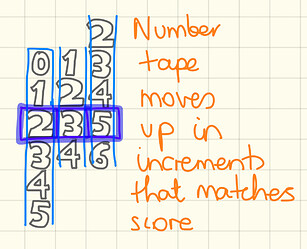 I considered this, but assuming the OP just wanted incremental number changes, then my method is better. To have a system like yours, it may be easier to do something with animations (like 3 “number” objects). Seems like an opportunity to make an extension with this idea of slot machine-type scrolling using text objects.

This is how I envisaged what @beanmatt was after - it is a slot machine style display. My only extra input would be to have an additional 0 after/below the 9, so there’s a smooth transition/rollover from 9 to 0.

If this is used in conjunction with a sprite mask, you’ll get the result you want.

I was thinking of something completely different which would be much more effort and probably not worth it.

Sometime things require more effort to get done, and end up totally worth it (to borrow a phrase from the younger generation)