Hi there! So I’ve been making my little game and it’s now time to implement save feature to it. So I read a bunch of tutorials, looked at the sample projects etc.
But I just can’t make it work. All of my variables in the game are global. I spent some time to make a scene variables but it didn’t work either.
I successfully can write a value of a global variable to the file (I can see the stored value in the developer console). But I can’t read a value and assign it to the global variable. Below is simplified example of what I’m trying to do.

The action description is clear about that:

Does this mean that I can store global var in storage and make something like:
Modify GlobalVariable = Variable
and read it from the storage this way?

Read and store in a scene var, and then copy that var to a global var, yes. 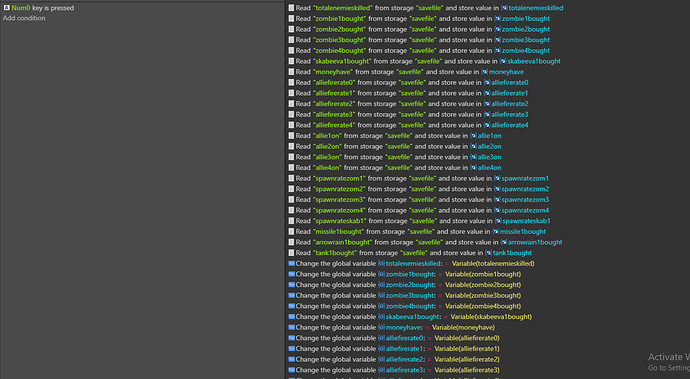 I had a similar difficulty a few days ago, look how I solved it, it’s very simple

[SOLVED] How to save game progress stored in a global variable? How do I...?

it is much simpler than it seems, an external event must first be created. In this event a global variable must be created, which when it is 1, as an action changes the scene to level 1, and writes the value 1. This procedure must be done for each level by changing only the number 1, with 2 in the case of level 2, with 3 in the case of level 3 and so on … Now, in the main menu, set “at the beginning of the scene” and put a sub-condition that verifies the existence of a group. This as an action…

Not my case =(
I already have all the variables and they’re changing during the game. I got the idea of what you did here, but it will not help me in this case.

All of my variables in the game are global. I spent some time to make a scene variables but it didn’t work either.
I successfully can write a value of a global variable to the file (I can see the stored value in the developer console). But I can’t read a value and assign it to the global variable.

When you read a value from storage it must be a Scene variable and the variable must be declared in the scene variable editor first, otherwise it is not going to work.

To go to the variable editor:
Right click in the scene → Scene properties → Edit scene variables

There add a variable, name it, and set an initial value either 0 if it a number value or just leave it blank if it a string.

After it should work. I believe this is the only case when you must declare the variable in the variable editor first.

I have all the variables as scene var. Yesterday in discord we had a discussion about it. I tried everything. I guess I’ll implement a save feature in my next game

Yes, I surely have. I write all of them into the storage and it works ( I can see a stored values ). I have a problem reading them back into scene vars afterwards

Try to reproduce the problem in a small project, maybe just write a value in to storege at the beginning than read the value from storage in to a scene var then pass the value from scene var to a global var then share the project if it doesn’t work for you so people here can have a look what is wrong with it.

I think you should change the way you are approaching this.
Don’t try to save each individual variable, instead move them all into a structure called “SaveData” as child variables. Then use the ToJSON to convert that structure into a single string and save that into local storage. When you load do the opposite and convert from JSON back into your global “SaveData” variable. This will save you a lot of “lines of code” but require you to consolidate your variables and update the references.