I’m fairly new to GDevelop and I’m looking to use it for educational curriculum. I went through the Platform Game Tutorial and got a feel for the program. The one thing I need to be able to do is embed videos into the game? For example control the player to go some where hit a button and a video would pop up or be laid onto the scene. Is it possible? If so how?

After working with it a little more I have found I can open a file in a video player(Native) or another webpage(HTML5) I would really love for this to be displayed in the scene without opening from outside. Any Ideas?

There is not a video object currently, it was very unstable

But it can be added to an HTML5 game through JavaScript (I know, programming is not the idea), but is a workaround for now if you know some programming

PS: You can edit your previous posts instead double-posting

Thanks Lizard! That is what I ended up doing I worked with my brother to figure it out. I added how I did it to the Wiki, hopefully it will help someone else in the future. I thought about editing the post but then I thought well maybe I’d pull more interest if there was a reply already. lol. Next time I’ll just edit.

Nice tutorial, but I’ve tryed and… nothing is shown on screen.
I’ve use a mp4 video and a webm video file.

Here is the screenshot of my events tab( attachment ). 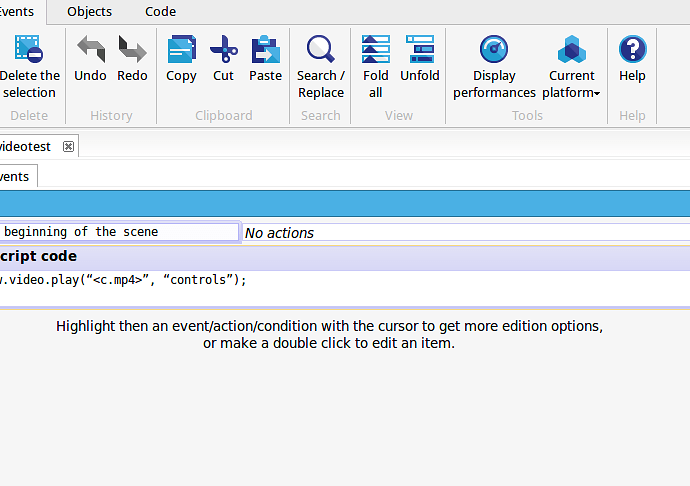 Hi Ricardo,
I test it and removed the both < > and at the topevent I used “Trigger once” and it worked so far.

But I cant start the video by clicking the play-button and also cant do anything on the Videoslider. Instead I can start the video with the spacebar, but the controllers of the player (play-button, speaker) dont work correctly.

Anybody have some ideas how to fix that? At the end of the video I get an emty stage, it would be nice to have the last picture of the movie. There is also a close button top/right which I like to remove?

But… same problem here. Different behaviors from Firefox, iceweasel and Chromium. I should be a way to load it just on a layer and not at all canvas. If we could load it just in a layer, we could use other layers to create control buttons.