[Solved] How can I ease-in (ramp up) a sprite animation FPS?

I have a sprite with a 2 frame walk-cycle animation.

The animation plays for .1s and loops. I guess that means it plays at 20 fps.

I would like to ease-in this animation so it starts at zero fps and goes up to full speed over the span of 1 second.

How can I achieve this?

There is an action to change the speed scale.

I guess you can trigger it every 1/20th of a second to increase the speed scale by 1/20…something like that.

Thanks. What would I use to trigger the increase? A timer? How would I get the increases to stop happening after 1 second?

Thanks, the variable tween looks like it can accomplish what I’m trying to do. 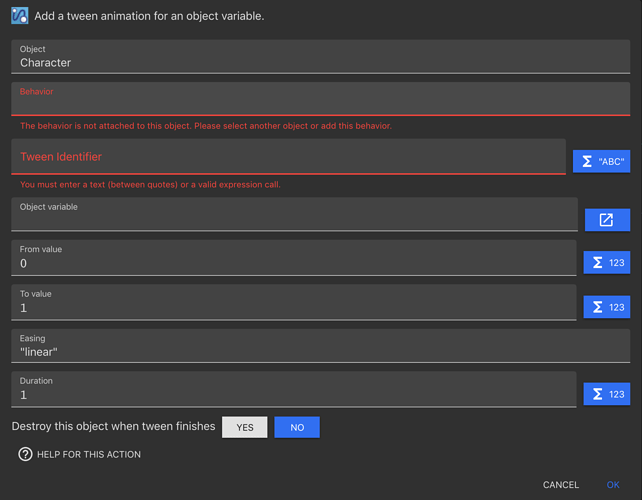 I’m not sure what to put in Tween Identifier or Object Variable though. I am looking to animate the “animation speed scale” from 0-1.

Object variable is the object the tween and the variable are attached to . The object needs to have the tween behaviour added to it.

Tween identifier is the name for you to identify the tween and can be any string you want. You can use that name to check if exists, is in progress, what the progress is, has finished and more.

Because you refer to a scene variable. But you are looking for the object variable.
Character.Variable(Speed)

I made that change and unfortunately it still doesn’t work. The animation doesn’t play (stuck on first frame of animation).

I figured it out by triggering the tween only once.