The extension of the dialog tree does not work for me

I guess something is wrong, but I can’t figure out what it is, I’ve tried several things, but it still doesn’t display the dialog.
Anyone who can look at what is wrong?
I am attaching screenshots of the events, the dialog tree and the moment it should be shown in the game 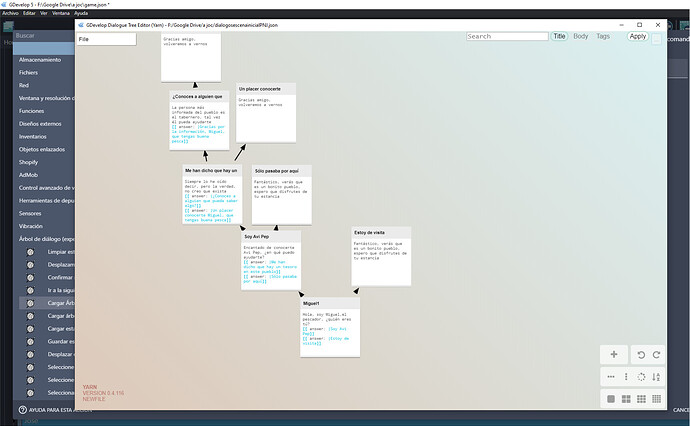 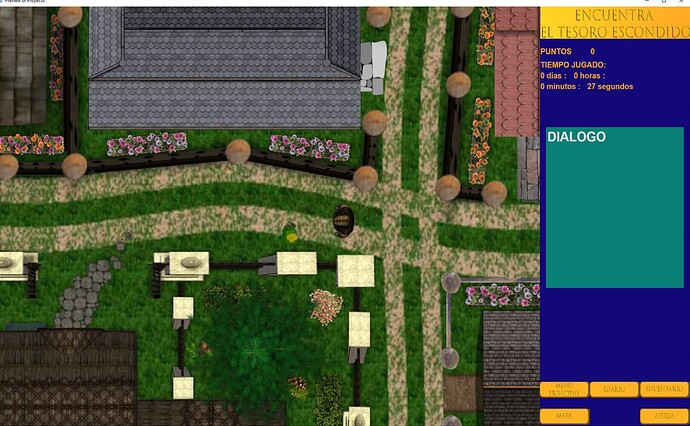 Please load the dialog file before reading it. I mean in a separate event, earlier.
There’s a Dialog Tree example project, always compare it to find the differences.

I had already downloaded the example, but it is not a very good guide for my case. In fact, the first test I did was copying all the events of the example, but there is something that doesn’t quite work. Then I did several tests, including the solution that you propose to put in separate events to load the dialog and start it.
I can’t see what is wrong, but I have to solve it, it is the most important part of the game, the dialogues with the npc
thank you for your interest in my question

The example is a very good guide for everyone.

You need to find the differences, make sure nothing is missing.

Where do you load the dialog in a text object? It’s not on the screenshot.

It should appear in the green box on the right, under the text DIALOGO
but it doesn’t appear, this is the problem, and I don’t know why, apparently everything is fine in the events

No, I mean, in your events, you don’t load the dialog in the text object, except when the type is options.
Again, check the example project and compare.

In the example it only changes the text when the dialog line is “text”, in the “options” line it does not load the text in the bbcode box, anyway I have tried to change the text of the bbcode box and it still does not work , I have tried all possible options from “DialogueTree::ClippedLineText()” to “DialogueTree::VerticalOptionsList(”>")" and there is no way to change the text in the bbcode box
I need to solve this in order to continue with the development of the game, can you help me?

“clippedlinetext” means it’s clipped, you have to make it scroll.
“OptionsList” means it’s for options, it’s not suitable for text.

Here are the expressions you can use, related to the dialog extension:
https://wiki.gdevelop.io/gdevelop5/all-features/expressions-reference#dialogue_tree_experimental

For dialog without scroll, you should use: DialogueTree::LineText()
and you should use a condition to verify that the dialog type is text.

I’m sorry, I must be very clumsy, looking and looking at the example I can’t get my dialog to work, I’ve spent more than 30 hours testing.
This is supposed to be a game I’m creating for my grandchildren, at this rate it will be for my great-grandchildren.
It’s the first time I try to create a game, but if you don’t give me more concrete help I won’t be able to continue, the dialogues are the most important part of this game.
I am attaching a screenshot of the last test I have done, if someone can tell me what is wrong, I will be infinitely grateful. 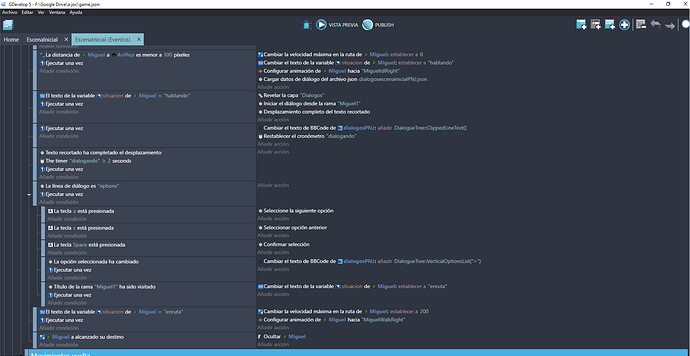 This is supposed to be a game I’m creating for my grandchildren, at this rate it will be for my great-grandchildren.

OK, but if you don’t listen to my instructions, we’ll never get there.

For dialog without scroll, you should use: DialogueTree::LineText()
and you should use a condition to verify that the dialog type is text.

You change the BBtext (on your third block) without any conditions, so you try to load the first text before you even load the dialog file, so it can’t work.
Remember the events are read/checked/executed from top to bottom, 60 times per second.
“Trigger once” without other conditions means the action will be executed on the first frame, and never again.

I have made the changes that I understand you suggest, now it loads the first line of text, but it does not load the options, I have tried adding a line to include it in the dialog box, in different events, but it still does not load it, I I attach screenshots of all this, tell me what is missing now to load the option lines? 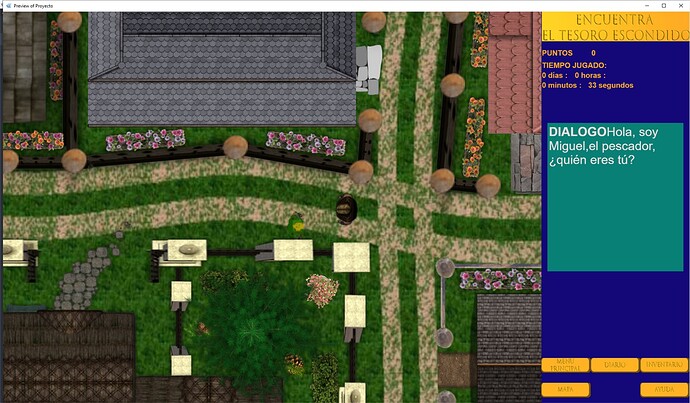 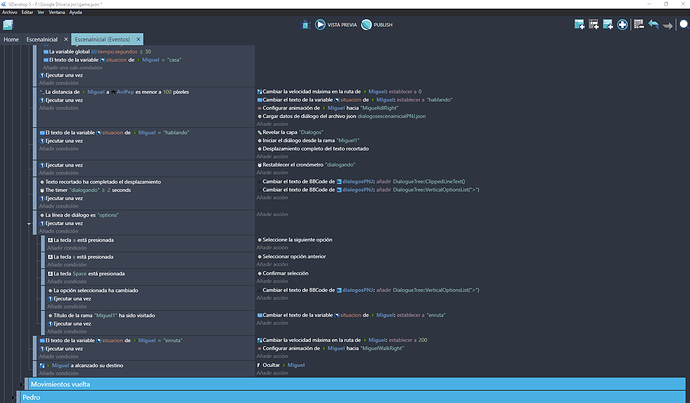 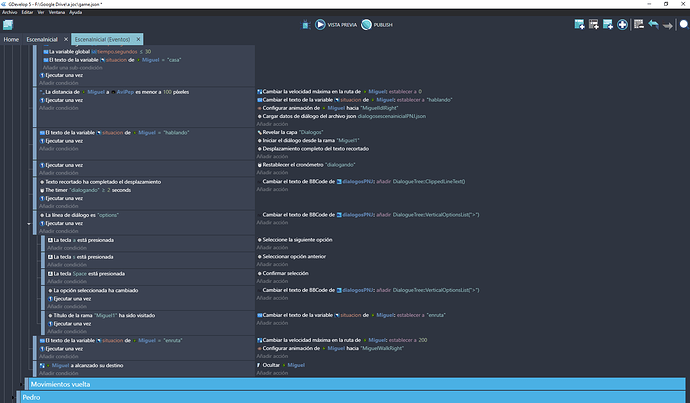 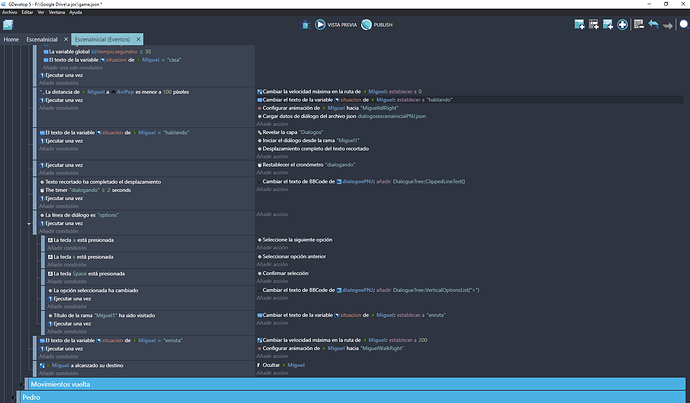 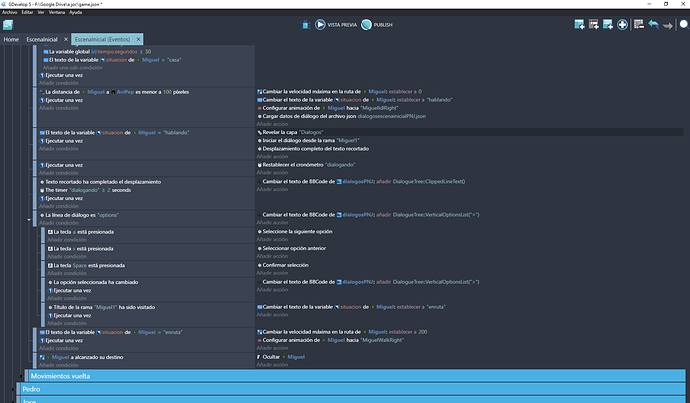 As you’ll find in the three example projects demonstrating the dialog feature, the options are to be displayed in a separate text object.

Well yes, I guess this is it, I’ll keep trying and I’ll tell you how it went

I’m sorry, I’m probably the most clumsy person in the world, but no matter how much I think about it, I can’t find the final solution, now you see the dialogue and the options, but it doesn’t advance and doesn’t change to the next option.
I have done all kinds of tests, with the events, but I do not advance.
I need someone to look at my events and put them in order, when I see how it is resolved I will be able to understand it and move on, comparing with the example I can’t do it because the dialog format is different
The whole game is based on dialogues, if I don’t solve it in the end I will have to abandon the project and I wouldn’t want to come to this.

I don’t know if this will help, but I can at least try. I also use the dialogue system, and it gave me a small problem at first, which I couldn’t figure out. Eventually, I saw that when I added a new “link” inside the yarn editor, it would add some extra brackets at the end of the link “|]]” which would make the script impossible to use. So now, every time I add a link in the yarn editor, I first remove those brackets to make it work. I don’t know if it will help you, but you could look to see if those extra brackets are there.

Hello, thanks for the advice, I already detected that at the beginning, but now it doesn’t anymore, I guess they fixed it.
The dialog works, it reaches the first options, what I have wrong, for sure, are the events, I don’t quite see the logic why it doesn’t work for me.
I would need someone to look at my events and tell me what I need to fix to make them work properly
By the way, from your nickname I deduce that you speak Spanish, it would be good for me to be able to connect with someone who speaks it, my English is not very good.
In case someone can help me, I leave the screenshot of the last modifications that I have made in the events. 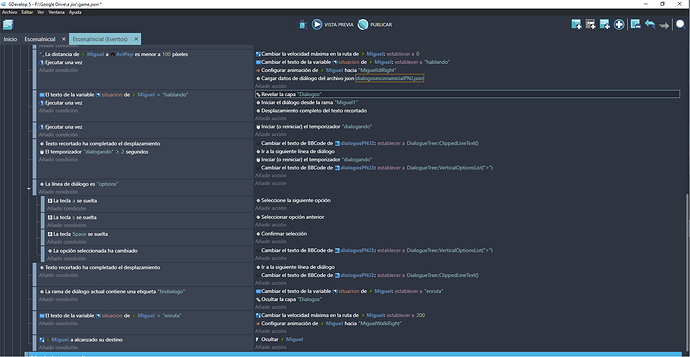 The Dialog extension is known to be capricious, so we have to be careful when using it. 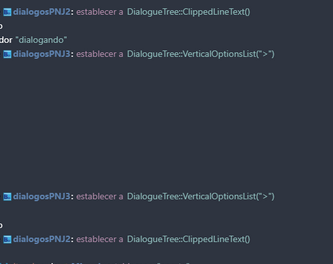 Calling each text content twice is not being careful.
I recommend that you clean up your events: remove anything not necessary.

Also, adding comments and grouping events is very recommended.
The big plus button at the top offers many features.

You are quite an imaginative fella. How does my nickname make me look Spanish?

I am sorry but i am from holland, I cannot understand your event sheet.
I would suggest starting from scratch and having a good look at the example projects. I used them as well to learn what my mistakes were. Good luck!