Hi mates, I made some test for a state machine and for my surprise I ended with something that may be intresting for some users a simple state machine thats include a 3 combo attack. 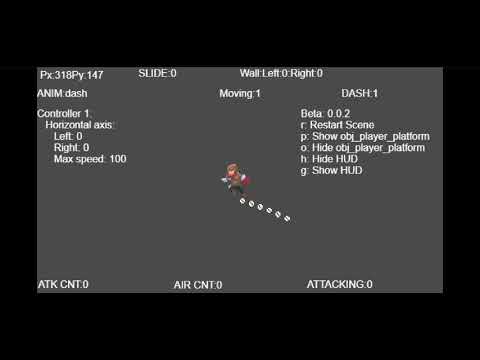 Source code: here
Oh! by the way it’s MIT Lisence so you can use the code in any project you want, just note the hero asset must be attributed to his creator, the link for the hero asset plus a lot of other animations are included there.

Hope this help someone.

13 Likes
[Solved] Controller and walking animation
I need a state machine and having Problems when my game is being tested the animations won't go past 2
[Solved] Bug? Character is stopping
Help with wall jumping in abstract platformer
Animation #3 and higher don't work
Create 2 attack mode of enemy in gdevelop
[Solved] How to make my charakter dash?
For new users - Must read this before post in How do I...?
Wanted: videos of your games made with GDevelop!
Dash attack after a jump
The_Gem_Dev May 27, 2020, 9:24pm #2

How do you determine if a skill causes damage? Edit hit boxes affect roles…

This could be done in a lot of ways, is up to the game develpoper to decide.
The basic is to add a little square Sprite when the player attack and then check if that Sprite collides with other object, could it be an enemy or destructible or anything.

Thanks for sharing the project source, Ulises! It will be handy for my future reference in my games. There is a lot of good ideas in there.

For your example to be added to the GDevelop base, it will need a bit of clean up, I guess. There are unused elements in your project, like obj_floor_colision for example.

Also, to be added to GDevelop examples list, it has too many functionalities in just one place. Consider breaking it in smaller examples, for each purpose individually, like:

For the Finite State Machine logic, instead of using one a 0/1 variable for each state like you are doing, have you considered using one single variable to manage the player multiple states? Like this:

One little last thing, you misspelt the variable name gs_jump_count.

Anyways, good job and thanks for sharing

Thanks a lot for the feedback.

I’ve been doing FSM by using animations, but can already see some longterm issues that I might clean up by switching to a single state variable as mentioned above.

1 - Walls are in groups, it’s done like that because is easy to integrate other sprites to act as walls, the variables created just to ensure the collision. I couldn’t find a better way to do this, note I’m total noob in GDevelop.
2 - 1 event sheet or 20 event sheets, is the same if the code works, it’s ok no?
3 - Some of the animations, triggers again when try to limit the attack number.
When I have some time i will remake the state machine to just one variable, right now I’m with A Pixel Adventure Legion and is a lot of work to do there.

Thanks for the info. Either way, I think it’s really clean and a fine alternative to the FSM tutorial on the wiki. Once I’m done with (slowly) doing my save system, I might redo my FSM to something similar and test out the results.

Thank you for sharing! Been looking for something like this. Enormous help indeed!

I fixed the dashing issues…

Now you can dash Horizontally and the dashing feels 10 times better and much more consistent.

2- Second issue: clipping through the walls

So using forces or making changes to the X position result in clipping through walls and many other issues.
What I did was very simple, when the player is in collision with the walls, stop the dashing.
Now the player don’t clip through any walls and everything is fine.

Here are the changes I made 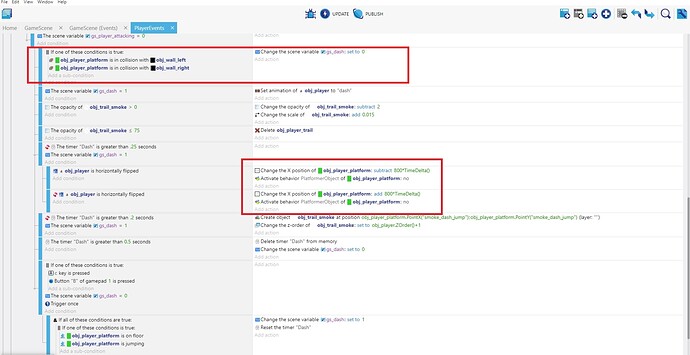 Thanks I think there is a submission of this template on GitHub to the GDevelop extension team is checking it. Thanks anyway.

Hi @UlisesFreitas,
thanks for your work.
I have a question for you: in this code (called always)

image1578×87 10.9 KB
you cenbter the camera 2 times. What is the advantage ? (I ask you i because I have a little problem using the second command used alone) 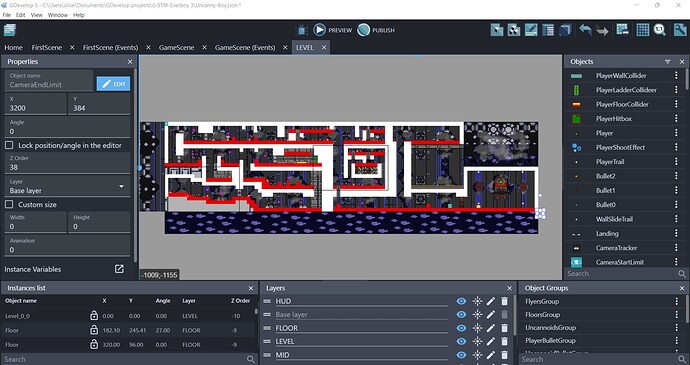 I’m sorry but I still don’t understand.
Given that you program in GD better than me (your code is very clean), if we removed the first command ( centers the camera on player), would it change anything?